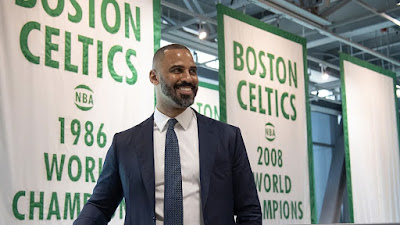 New Celtics head coach Ime Udoka made it clear what he expects from All-Stars Jayson Tatum and Jaylen Brown, during his introductory press conference Monday.
Udoka coached his "two young pillars" back in the 2019 FIBA World Cup for Team USA and is excited to be able to work with Tatum and Brown again, as he looks to turn the Celtics back into title contenders.
On Tuesday, Udoka made his very first appearance on 98.5 The Sports Hub and was asked if Marcus Smart could also be considered a pillar for this current roster, to which he responded simply with, "Yeah."

"I've spent time with all three of those guys -- they all bring something different to the team. What Marcus brings is invaluable: he's the heart and soul of the team at times," Udoka said of Smart on The Zolak and Bertrand Show.

Udoka then mentioned how critical Smart's leadership was and his fearlessness when playing against the national team's starters, as just an example of what he brings to this young Celtics group.

"He was the only guy who really wasn't scared out there," Udoka said of the veteran guard. "We got future NBA All-Stars and All-NBA guys, and they were a little timid at times. But Marcus was a very vocal leader. He has that edge and toughness about him, so the things he brings to your team are the things you love every player to bring. You hate playing against him, but you want him on your side.

"He's another foundational piece. He's been here through thick and thin, seen the winning and seen some down times. What he does for Jayson and Jaylen is invaluable in my eyes," he added.

While Smart's future remains up in the air, the longest tenured Celtic has one year remaining on his current deal worth $13.8 million. Despite clear support from Udoka, Smart could still end up on the trading block or possibly even get an extension.
Stay tuned, it's going to be quite a summer for new president of basketball operations Brad Stevens.
Joel Pavón
Follow @Joe1_CSP