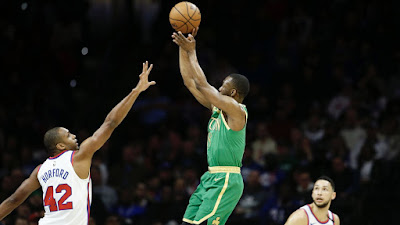 Celtics are trading Kemba Walker and their 2021 first-round pick to the Oklahoma City Thunder for a deal that includes Al Horford, per sources.
According to ESPN's Adrian Wojnarowski, Walker is being sent along with the No. 16 overall pick in this year's NBA Draft, plus the Celtics are also sending a 2025 second-round pick to the Thunder in return for Horford, young big-man prospect Moses Brown and a 2023 second-round pick.

The Celtics are trading Kemba Walker, the No. 16 overall pick in the 2021 draft and a 2025 second-round draft pick to Oklahoma City for Al Horford, Moses Brown and a 2023 second-round pick, sources tell ESPN.

This trade comes after a disappointing 2020-21 season for the Celtics, who were eliminated from the first round of the playoffs by the Brooklyn Nets 4-1. Walker missed 29 games due to management of a left knee injury that began in 2020 prior to the Bubble, which bleed into the start of this season.
Walker, 31, has two-years left worth $73 million on his current max deal -- giving the Celtics some financial flexibility by getting out from under the four-time All-Star's contract.
Horford rejoins the Celtics after spending three seasons between 2016 to 2019 in Boston, before signing a four-year, $109 million deal via free agency with the Philadelphia 76ers. The veteran big never found a role in Philly and spent this past season in Oklahoma City, playing near All-Star form despite being shut down for the final 28 games following the trade deadline.
At 35, Horford has two years left at $53.5 million on his contract, with a partial guarantee of $14.5 million for 2022-23 campaign.
Brown, 21, averaged 8.6 points and 8.9 rebounds in a productive second season that led to signing a multi-year deal in Oklahoma City. At 7-foot-2, he brings more rebounding and frontcourt depth, as his contract is worth only about $5.6 million for the next three years, with a team option for 2023-24.