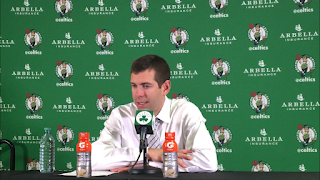 Before the All-Star break, Brad Stevens said he planned on looking over film to identify the issues that were plaguing his team and vowed to make changes to his rotation that he would deem as necessary to turn things around.

Fast forward two weeks, and the Celtics have been extraordinary, riding high on a four-game winning streak since the All-Star break. Boston has regained momentum in the Eastern Conference.

After dropping three straight before the week-long break, the Celtics turned things around -- leaving head coach Brad Stevens with a sense of comfort with the shape of his team, even though according to him the best he's felt all season long about his group happened before the streak.


"I felt really good about our structure; probably the best I've felt about our structure all year heading into the break, on offense. At least since Gordon (Hayward) went out," Stevens said after Wednesday's win against the Hornets. "We did not shoot it great at times against Cleveland but I felt like in that last week (before the All-Star break) or so we had some things that were going our way even though the numbers weren't showing. I felt good about that.

"I didn't think we needed to do a whole lot other than make sure we execute at a high level. Our first practice out of break was hard, long and real. And you could kind of tell that our guys had a good focus about them. We would be able to pick up offensively, at least as well as we could and then defensively we still have to do a better job"

The tough practice certainly made a difference. The Celtics have turned it up a notch on the offensive end, specifically in the second halves of their recent four-game streak.

Boston is averaging 55 second-half points since the break. To put that into perspective, the Warriors average a league-high 57 points.

As the only playoff team that finds itself ranked in the bottom half of the league in points per game (104.1) this season, the Celtics have been scoring at a significantly higher rate throughout their recent stretch. With the second unit averaging 53.5 points, Boston is averaging 118.5 points a night since the All-Star break, which has resulted in four consecutive wins, all won by double-digit margins.


"I think obviously when you go through the past month, no matter what, even if you've played poorly, there's always something that you can take from that," Stevens explained. "And one of the things [is] Terry's [Rozier] growth has been evident. He probably really benefited from starting three games and playing as many minutes and being counted on; the way we counted on him. And then Marcus Morris just looks more comfortable every time he takes the floor. The way that they're scoring the ball, Marcus Smart coming back -- obviously is a double figure scorer for us -- and then what Greg [Monroe] gave us tonight was great."

While it is fair to say that the Celtics' recent success is a direct result of a relatively light schedule against four sub .500 teams, the truest test for Boston comes in a few days when they travel south to take on the Rockets Saturday night. Holding onto the best record in the league, the Rockets (47-13) are on a 13-game winning streak and are the second-best scoring team around, averaging 113.8 points a night this season.

Kyrie Irving, who has been on a tear since the break, has also been one of the biggest reasons behind why Stevens has been able to sit his starters throughout the fourth quarter of their last two outings. He's averaging 27 points in his last four games while shooting at an absurd 58.2 percent clip.

However, Stevens knows in order to maintain this level of success it's going to fall on the other guys to hold their weight on the offensive end, and has confidence in his roster's ability to do so.


"I think that we're going to need as many guys to put the ball in the basket as possible, we can't rely on one or two guys," Stevens explained. "We've got a team that if we soar with our strengths, we can do that."