Celtics 134 - Hornets 106: Kyrie Irving, Kemba Walker put on a show in a blowout 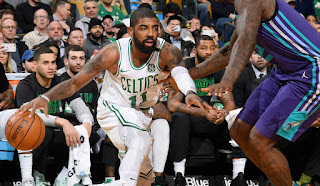 While the game itself wasn't as competitive as most would have liked it to be, witnessing Kyrie Irving and Kemba Walker duke it out Wednesday night at TD Garden was worth the price of admission.

The Celtics stretched their winning streak to four straight games, topping the Hornets, 134-106, snapping Charlotte's winning streak in the process in a blowout fashion. Irving's game-high 34 points in three quarters not only propelled his team into the point of no return as the Celtics took a 24-point lead into the final frame, but it also pushed both head coaches to empty out their bench as the starters watched each other's second units finish off the game.

But the show that took place between the two All-Star point guards was the best part. While Walker put together a perfect first half -- yes, he was literally perfect from the floor, scoring 21 points on 8-of-8 attempts -- Irving picked apart his opposition, connecting on 10-of-14 shots for 24 first-half points.

Still, the Celtics only held an eight-point, 67-59 lead at the half. But it wasn't like that for long.

Irving poured in 10 points before the final frame, some right in Walker's face, as the Hornets All-Star looked human again when he misfired on four of five attempts. Once the well ran dry for Kemba, Charlotte had little to no secondary options as its defense let up and the Celtics' offense erupted -- they shot 60 percent.

Walker led the Hornets with 23 points, Dwight Howard added 21 points and Frank Kaminsky added 16 points from off the bench.

Boston's 134 points marks a season-high for a team that's gotten off to one heck of a run since the All-Star break. The Celtics will have a couple of days off before facing one of their toughest opponents of the season on Saturday -- when they travel to Houston to take on the Rockets.

The season-high in points was fitting on the night seven Celtics players scored in double figures while shooting 62.1 percent from the floor. Boston's second unit entered Wednesday's game averaging over 50 points a night and outdid themselves against the Hornets by combining for 61 points.

Monroe, who played extended minutes due to Daniel Theis (hamstring) sitting out, was a factor down low, Marcus Morris capitalized in the fourth quarter while the starters rested and so did Terry Rozier, who also finished with 14 points.