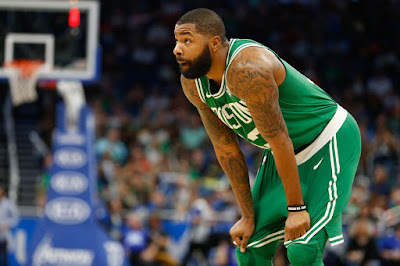 Marcus Morris left after the third quarter of the Celtics win over the Phoenix Suns on Monday night, when he sprained his right ankle and did not return.

X-rays of Morris' injury came back negative, while it was the same ankle that forced him to sit out against the Sacramento Kings this past Sunday.

"We'll see how it responds," head coach Brad Stevens said of Morris' right ankle, after the Celtics forward came down on the foot of Phoenix's Troy Daniels while shooting a 3-pointer.

Daniels was called for a foul on the play as time expired at the end of the third quarter, while Morris hobbled over to the charity stripe and made all three free throws before leaving the game with the Celtics holding a 77-65 lead heading into the final frame.

Morris, who averaging 18.3 points, 5.3 rebounds and shooting 48.2 -percent from behind the arc in the month of March, finished with 20 points against the Suns.

The Celtics beat the Suns 102-94 for their third straight win on the road, and fourth consecutive victory overall.