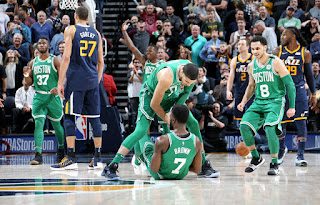 Surprisingly, the wins continue to stack up for the Celtics and Wednesday night's victory over the Jazz was arguably their most impressive.

Facing one of the better defensive teams in the league, the C's countered Utah's lead with a 9-0 run at the end of the fourth quarter that was capped off with a game-winning 3-pointer from Jaylen Brown to seal a 97-94 win. The improbable win in Utah completed a four-game sweep out west, and stretched Boston's winning streak to five straight.

With the game tied at 94, the Celtics had the final possession of regulation as Brad Stevens called a timeout to set up a play. Shane Larkin drained the clock before driving to the hoop and kicking it out to Semi Ojeleye, who was behind the arc. When Jazz guard Donovan Mitchell ran out to put a hand in his face, Ojeleye pumped faked and found a wide open Brown -- who leaped back from the free-throw line -- at the top of the arc where he swished in a go-ahead trey with one-tenth of a second left on game clock.


Brown led the Celtics with a team-high 21 points, Jayson Tatum contributed 16 points while Terry Rozier and Aron Baynes each finished with 13 points.

The Celtics will have the next three days to rest up before they host the Raptors at TD Garden Saturday night.

Shane Larkin turned in some valuable minutes in the back court as Brad Stevens was able to trust his third-string point guard in the fourth quarter. He finished with a game-high plus-25 player rating and flirted with a double-double (10 points, 9 rebounds) and dished out four dimes.