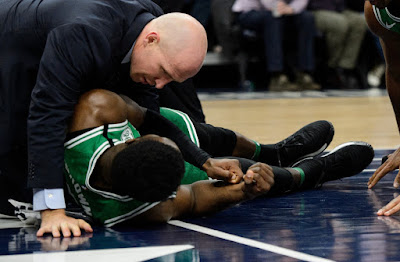 While the Celtics finished off topping the Timberwolves with ease towards the end of their 117-109 victory, there was an unsettling feeling lingering throughout the Celtics bench.

The Celtics, a team that has already dealt with one overwhelming injury in Gordon Hayward this season, collectively held its breath when they watched their teammate Jaylen Brown take a tough fall in the third quarter of Thursday's win. His hands slipped off the rim after dunking the ball and lost his balance -- ultimately landing hard on his back/neck and hit his head against the floor.

The dazed look on Brown's face as he remained motionless on the floor sent most into a state of concern, including head coach Brad Stevens.


"I think we were all standing there, a lot of us were standing there, watching him kind of go through the progression that they put him through which obviously you probably do anytime you have a neck injury or the threat of a neck injury," Stevens said. "You felt a little bit better with each progression you saw them go through so that was good. So we felt like he was going to be okay, it was just a matter of, obviously, he'll probably be uncomfortable for a few days."

Stevens added that Brown was taken to a nearby hospital to undergo a CT scan, and he's waiting for an update on Brown's status. The fact that Brown was able to walk off on his own is an encouraging sign.

Brown, who most likely will enter the NBA's concussion protocol, seemed to be in "good spirits" when he left the arena, Stevens added. The second-year guard took to Twitter to thank everyone for their support and says although he has a headache, he's doing fine.