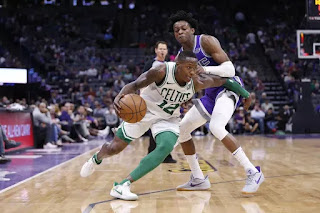 While Terry Rozier fell one three-pointer shy of tying the Celtics franchise record (9) for most treys made in a single game, he did manage to reach a rare feat against the Kings Sunday night etching his name in NBA history.

Rozier became the first player to ever score 33 points, including eight 3-pointers, grab five steals and pull down five rebounds in a single game. His phenomenal play on both ends of the floor led the Celtics to a 104-93 win over the Kings, the Celtics' third consecutive win.

Without All-Star point guard Kyrie Irving, Boston has now won four of their last six. What's more impressive, they've knocked off two of the four top teams in the Western Conference and did it in dramatic fashion.

Win No. 50 came against the lowly Kings Sunday night, but wins against the Thunder and Trail Blazers shouldn't have been overlooked. With 24 seconds left, the Celtics crawled out of a six-point hole that was topped off by a game-winning trey from Marcus Morris.

They then followed that up with another come-from-behind win over the Trail Blazers Friday night on the road -- where they erased a 12-point fourth-quarter deficit. But without Morris (ankle), it was Rozier who headlined a win over Sacramento thanks to a 19-point second half outburst.

His numbers have skyrocketed this month. Rozier is averaging 17.3 points, 5.1 rebounds and 4 assists while shooting at a 43 percent clip from the floor and from behind the arc.

Without Kyrie Irving, who will be out for the next three-six weeks, Brad Stevens will heavily rely on Rozier's offense, who hasn't shown any signs of slowing down. Is this the real Rozier? The Celtics better hope so