Marcus Smart gets fined by NBA for criticizing officials 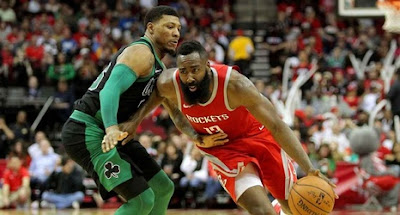 Marcus Smart has been fined $15,000 by the NBA for publicly criticizing the referees following the Celtics loss to the Houston Rockets on Saturday night.

Smart told the Boston Globe that Rockets All-Star and league MVP candidate James Harden "gets the benefit of the doubt" from officials.


"You get certain players who get calls that other guys just wouldn't get," Smart told Adam Himmelsbach of the Globe. "We all know the rule. We all understand it. Superstars are going to be superstars. We get it. It is what it is. We've just got to play."

Harden went to the free throw line 13 times against Boston, getting Celtics swingman Jaylen Brown into foul trouble early, while Smart also was sent to defend the NBA's scoring leader at various times throughout the night.


“When you’re playing a guy like that who gets those types of calls, it’s pretty much like you’re playing in foul trouble,” Smart said. “You’ve got to play really certain. You have to be really solid. You can’t really play the defense that you want, because you know nine times out of ten he’s going to get those calls. It doesn’t matter whether your hands are up or not. He still gets them. We saw that here tonight a few times, and we’ve seen that every other game. He has a way of using his hands, grabbing us, pulling us into him and drawing those fouls. He’s been doing it for a long time. He gets the benefit of the doubt.”

Two months ago James Harden complained about the lack of calls after the Celtics pulled out a 26-point comeback win against the Rockets and there were only two referees.


"A lot of grabbing, a lot of holding," said Harden back on Dec. 28. "I mean, how else am I supposed to get open? It's just tough. You can't have two officials in a professional game. There's a lot of no-calls that need to be called."

For the record, Harden did not receive a fine for his statements. Smart on the other hand not only got fined for his observations, but it just so happens he turns 24 years-old today.

Happy Birthday Marcus, what a great day to be a professional basketball player.