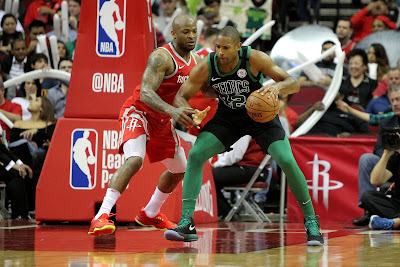 It was another down to the wire ending between two of the NBA's best on ABC Saturday night primetime. While neither team ever grabbed a double-digit lead, it was the Rockets who took advantage of the Celtics' late turnovers in a 123-120 victory, extending their win streak to 15-games.

Eric Gordon led all scorers with 29 points (hitting 7-of 11 from behind the arc) off the bench for the surging Rockets, who have the league's best record at 49-13.

James Harden struggled to get his offense going; shooting 6-18 from the field (3-12 from 3-point territory), but finished with 26 points, 10 assists, and 7 rebounds. Trevor Ariza added 21 points, while Chris Paul chipped in 15 points and 7 assists for Houston.

Boston, winners of four straight since returning from the All-Star break before heading into the Toyota Center, looked to sweep their season series against the Rockets after a 26-point comeback win at the TD Garden two months ago.

Marcus Morris led the Celtics with 21 points, including going 5-of-7 from deep, while Kyrie Irving didn't having it going offensively, shooting 6-of-17 to end up with 18 points and 6 assists. Greg Monroe turned in his best performance since being acquired by the C's, finishing with 18 points and 6 rebounds on the night.

It was a back and forth first half, as the Celtics led 64-58 over the Rockets at intermission. Boston would go cold halfway through the third quarter when Houston scored nine straight unanswered points to take a 76-74 lead.

With the game tied 81-81, Boston was hit with delay of game warning and Brad Stevens was called for a technical foul, as the Celtics would use a 8-2 spurt to grab a 89-86 lead heading into the fourth.

Al Horford (10 points, 6 rebounds and 3 assists) missed back-to-back shots on the next two Celtics possessions and it became a free-throw contest between Chris Paul and Kyrie Irving.

When it came to Irving's final free-throw attempt with 2.8 seconds left and the Rockets up 120-122, he missed the shot on purpose, but was called for a violation for not touching the rim.

Eric Gordon made one of two free-throws on the other end to give Houston a three-point lead before Marcus Smart (11 points, 6 rebounds and 5 assists) received a cross-court pass, but missed the potential game-tying three-pointer over Chris Paul, to give the Rockets the win.


"I just thought they maximized more possessions than we did," Boston coach Brad Stevens said on the loss. "Those were two good teams playing and both teams deserve a lot of credit for how they played."

Despite the Celtics bench scoring a season-high 67 points, the Rockets defense down the stretch made the difference, forcing three crucial turnovers that turned onto four points and a go-ahead jumper by Ariza, as Houston never looked back.

Boston is now 44-20 and are two-games back of the Toronto Raptors for the best record in the Eastern Conferance. They will head to Chicago to take on the Bulls Monday night for the second of their three-game mini road-trip.

Tip-off from the United Center is at 8.

Celtics outscored the Rockets in the paint 48-32, while Houston went 19-of-49 from behind the arc to Boston's 13-of-24. Daniel Theis (hamstring) missed his second consecutive game, no word if he'll make his return to the Celtics lineup at any point of their road-trip.