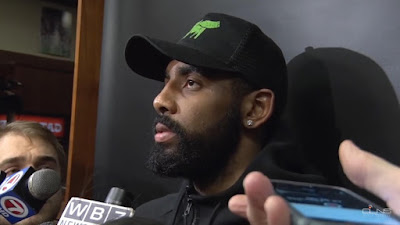 After missing the second half of Sunday night's 99-97 loss against the Pacers, Kyrie Irving says rest is the best medicine at this point of the regular season.

Head coach Brad Stevens, who believes Irving is dealing with general soreness rather than any structural damage, says he didn't learn about the discomfort Irving was going through in the first half against the Pacers until halftime.


"I had no idea (Irving was feeling sore) but at halftime he was talking about it -- felt some soreness in it (left knee)," Stevens said. "Probably similar to the Houston game in the third quarter. He was getting it worked on after halftime and we don't know what it is above general knee soreness. I think that's the case but we'll go and get as much testing if we do but we think it's general knee soreness."

This is the second time in less than one week Irving's knee has forced him to sit out. He notified the Celtics of the pain he felt in his left knee after their game against the Rockets, which resulted in Irving taking the night off against the Bulls before returning to the lineup to take on the Timberwolves last Thursday.


"It's just been aching for a little bit," Irving said. "I just think I need to take some time."

Are you worried about it?


"I'm not concerned," Irving said after Sunday night's loss. "Where we are in the season, I'm pretty comfortable. I think that competitively, I think that's what I'm more or less concerned about, just when I actually do get back on the floor I want to feel the level I expect myself to play at and I want to play at. And being able to sustain it. So right now I'm unable to do that. So I've just gotta deal with that."

Given Irving's history with his left knee, this is a bit disconcerting if you're the Celtics. Prior to his arrival to Boston, Irving fractured his left kneecap in Game 1 of the 2015 NBA Finals, which forced him to miss the rest of the series due to season-ending surgery.

Adding further concern is a report that was released two months ago out of Cleveland. According to Cleveland.com's Joe Vardon, Irving needs minor surgery to repair his left knee as a follow-up procedure to 2015's kneecap surgery, and used it as leverage over the Cavaliers when he threatened to sit out the 2017-18 campaign last summer if the Cavaliers didn't comply with his trade demands -- a report Irving adamantly denied.

When asked if he thinks the soreness he's experiencing will ultimately turn into him needing surgery done to his knee, Irving says he's hopeful that's not the case.


"I don't know," Irving said. "I hope not. I've been down that road before. I've had the fractured kneecap already. So I think taking games like this, being smart about it probably will put me in a better position not to be out for a long period of time. That's the last thing I want to do."