4 Things We Learned about the Celtics' loss against Rockets 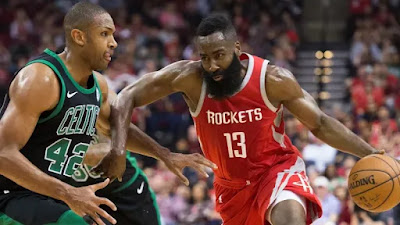 The Celtics and Rockets put on a show Saturday night, giving the NBA one of its best nationally televised games of the season.

Houston's 123-120 win over the Celtics stretched its winning streak out to 15 and left a sour taste in the Celtics' mouth after blowing a six-point fourth quarter lead. Although a six-point lead doesn't mean much in basketball, it's the way the Celtics lost their advantage that made their 20th loss a bit more frustrating than others.

Still, we learned quite a bit about this year's Celtics team in what we saw Saturday night. Here are four things that the Rockets taught us:


1. Best loss of the season

A slice of humble pie has never hurt this year's Celtics team. Boston went toe-to-toe with the hottest team in the league and nearly handed Houston its first loss in 15 tries. While being reminded of just how important Kyrie Irving is to the Celtics (something most of us already knew), the Celtics held their own while their All-Star point guard missed 11-of-17 from the floor.

Crucial mistakes down the stretch did them in as the Rockets made the Celtics pay. Boston held a six-point lead after Terry Rozier drained a 3-pointer with four minutes left. But when the Celtics surrendered two humongous turnovers.

The first came after Rozier grabbed a rebound that was snatched away by P.J. Tucker, who found Trevor Ariza for a game-tying 3-pointer, and the second came from Al Horford, who threw the ball away from the floor after grabbing an offensive board with 23 seconds left to play. That's how thin the margin of error is when facing arguably the best teams in the league, and you can expect the Celtics to learn from Saturday night.

This isn't the kind of loss that's going to discourage this group, it's the kind of experience a team that's striving for the NBA Finals that can push them to limit its mistakes and win a game when their best player is off.

The bench continued its hot streak since the All-Star break -- which led to extended minutes down the stretch for guys like Marcus Smart, Terry Rozier and Marcus Morris. They combined for 67 points, Marcus Morris' 21 points and three steals led the second unit while Greg Monroe turned in his best performance as a member of the Celtics (18 points, 6 rebounds).

All four guys (of the nine-man rotation) contributed on both ends of the floor, and gave Brad Stevens a sense of security that on the big stage his bench players can rise to the occasion. We also learned that Stevens will be trimming his player rotation against elite teams like the Rockets, and this could be what it will look like moving forward.

Still, expect to see guys like Daniel Theis and Semi Ojeleye make their final cases for why they should break through Stevens' rotation against teams like the Bulls, Magic and Suns as the regular season winds down.

With 5.2 seconds left, Kyrie Irving was intentionally fouled in an effort to take away the Celtics' chances of tying the game from behind the arc. He trimmed the lead to two when he made the first free-throw but when he tried to intentionally miss the second, he banked the ball off the backboard and into the rim.

After both teams played the fouling game once again, Irving found himself in the same scenario. This time, with two ticks left on the game clock. He again made the first attempt and again threw the ball off the backboard, only this time it didn't go through the hoop nor did it touch the rim -- which resulted in a free-throw violation and gave the ball back to the Rockets.


"I suck at them," Irving told Celtics reporters on intentionally missing free-throws. "I keep telling my teammates, 'I'm not good at missing,' I'm serious. I gotta be able to do it."

I'm sure Irving will be practicing how to intentionally miss free-throws before Monday's game and throughout the regular season. Another reason why the Celtics' loss against the Rockets will only make them stronger -- Irving will be missing clutch free-throws off the rim in no time.

The intentional ones, of course.


4. The Celtics are missing the old Al Horford

Al Horford's struggles since the All-Star break weren't as translucent throughout the Celtics' four-game winning streak, yet, glistened against the Rockets. Al scored 10 points in Houston on Saturday but what stood out the most were two shots he didn't make late in the fourth quarter and the critical turnover he made after pulling down an offensive rebound.

Instead of calling a timeout, Horford attempted to get the ball out to one of his teammates and instead gave the ball to Trevor Ariza. He's averaging 7.2 points while shooting 30.2 percent from the floor in his last five outings.

Hopefully for the Celtics, the struggles are temporary for Horford. Stevens is going to need his production late in the regular season and certainly in the playoffs if his team wants to make a deep run.

While the slow start since the break has been noticeable, it was never viewed as an issue until the Celtics turned in a loss. But the turnaround could be inevitably on the way, given the Celtics' relatively light schedule.