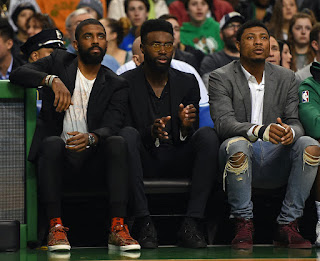 The Celtics announced Friday that All-Star Kyrie Irving will undergo a ''minimally invasive procedure'' Saturday on his left knee to help alleviate the soreness that has kept him sidelined throughout the last four games.

After experiencing what was categorized as "general soreness" by head coach Brad Stevens, Irving had a second opinion on Thursday which resulted in team officials announcing Irving will in fact have work done on his left knee. There is no timetable set for his return.

Earlier in the week, there was speculation that Irving may need season-ending surgery -- which makes Friday's announcement good news in some capacity. However, finding out how long it will take for Irving to recover from the procedure will be critical for the Celtics -- a team that was destined for a deep playoff run before March's slew of injuries.

Irving's setback adds to, what's has already been, a cruel month for the C's. With Daniel Theis out for the season, Marcus Smart expected to miss the next 6-8 weeks, and Jaylen Brown still in the NBA's concussion protocol, Boston will now most likely start and finish its four-game road trip without Irving.