Jaylen Brown speaks about his concussion, eyeing a return against Sacramento 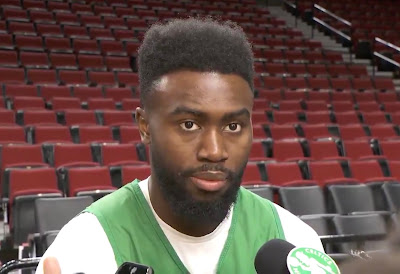 The short-handed Celtics are out in Portland getting ready to take on the Trail Blazers and it looks like they might catch a break, as one of their starters Jaylen Brown (concussion) could make his return at some point this weekend.

Brown, who suffered a concussion back on March 8 in the Celtics win against the Timberwolves, after a scary fall that looked like it could have been much worse for the second year swingman. Fortunately, Brown avoided any major injury but was placed into the NBA's concussion protocol.

According to Brown, who went through a light workout during practice on Thursday afternoon, he says barring any major setbacks, he'll make his return on Sunday when the Celtics take on the Kings.


“I’m feeling a lot better. I’m just trying to hurry up and get back... I’m tired of not playing,” Jaylen Brown said with a smile. Adds that his most likely return would be in Sacramento.
— Boston Celtics (@celtics) March 22, 2018


Brown, who spoke to the media for the first time about his hard fall in Minnesota, was asked if he remembered anything about what happened on that night, two weeks ago.

Aside from his fall, Brown also spoke about how he is progressing over the last 14 days under the league's protocol


"I'm feeling a lot better," Brown said. "Just trying to make sure I'm 100 percent and take care of the neck, back and head area because it's crucial. So making sure all those areas are covered and get back to my team as soon as possible.

The Celtics begin a four-game road trip on Friday night against the red hot Blazers before heading to Sacramento and Phoenix for a back-to-back and they wrap up their last west coast swing of the regular season in Utah.