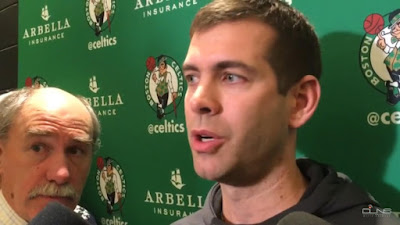 While the injuries reports continue to pile up for the Celtics throughout the past week, the biggest bombshell broke Tuesday afternoon in regards to Kyrie Irving's right knee.

After an initial report indicated that Irving's knee wasn't getting any better, many speculated that the All-Star point guard may need surgery -- which at this point of the season, would ultimately end his year. Celtics coach Brad Stevens spoke to reporters Tuesday evening before facing the Thunder at TD Garden.


"From everything that I was told last, [Kyrie Irving] is probably not going to be on the trip," Stevens said. "Same thing that we've been talking about. That knee has been sore but he's worked really hard to manage it throughout the entire season and I think he's had some pretty good days recently. I'm encouraged by it, you know, in the big picture."

Stevens, who didn't completely rule out Irving for the entire duration of the four-game road trip, says Irving will seek a second opinion, the biggest reason why he will most likely rejoin his teammates after the trip.


"He's gonna get a second opinion -- which is why he probably won't go on the trip and I think that's smart of him," Stevens explained. "But I haven't talked to him yet since that decision was made and I haven't talked to Danny or our staff about it."

Stevens was adamant in saying that Irving is sitting out because of soreness and that there isn't any structural damage that he knows about.


"He's out because of knee soreness not because we're choosing to rest him," Stevens stated. "That's the bottom line. So I don't want to say that one way or another. We've talked about it. We want him to feel 110 percent, he wants to feel 110 percent.

"Obviously, we were fortunate that we created a cushion early on in the year as far as playoffs and everything else but this is not one of those situations where we're choosing to rest somebody. He's out because he has a sore knee."

Irving hasn't played since March 11 -- when he was forced to sit the second half in a Celtics loss to the Pacers. Tuesday's game against the Thunder will mark the fourth consecutive game Boston has played without their All-Star point guard.