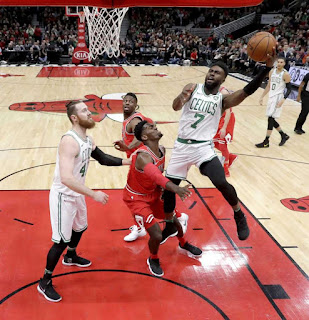 Coming off a loss that slipped through the Celtics' fingers last Saturday, the Celtics entered the United Center Monday night with an increased level of focus.

The Celtics found their offensive rhythm early and often against the Bulls. They grabbed a double-digit lead early in the first quarter and held onto it until the final buzzer in a 105-89 win.

Behind a 15-0 run, the Celtics leaped ahead to a 35-16 lead at the end of the opening frame. Al Horford chipped nine points in the first quarter and Jaylen Brown led all scorers with 14 points at the half.

The Celtics held the Bulls to 29 first-half points and took a 27-point lead into the second half. and extended it to 37 -- their largest lead of the night -- shortly after the break. Brown was in attack-mode while the Bulls tried to keep up, and Shane Larkin, who got the start over Kyrie Irving (left knee), continued his solid night as the team's facilitator.

Through three quarters, Boston shot at a 53 percent clip and cleared its bench for the fourth quarter. Brown finished with a game-high 21 points, Jayson Tatum chipped in 14 points, 5 rebounds and Al Horford added 13 points and 7 rebounds.

Boston's offensive efficiency proved to be too much for Chicago to handle. Even without their leading scorer in Irving, the Celtics utilized their front court and took advantage of mismatches via the pick-and-roll which opened up guys like Brown, Horford and Tatum.

Denzel Valentine had a team-high 20 points off the bench, Lauri Markkanen contributed a dozen points and David Nwaba chipped in 10.

Larkin filled the stat sheet a bit with 9 points, 4 rebounds, 4 assists and a pair of steals. And with early speculation of Irving potentially sitting out of Thursday night's game against the Timberwolves, we could see him back out there in the starting lineup before the Celtics head back home for a Sunday night matchup against the Pacers.

In the meantime, the Celtics will have two days off before facing off against Minnesota.

The Celtics are now averaging 117 points a game since the All-Star break, and have won five of six throughout that span. Boston also out-rebounded the Bulls, 53-36. Greg Monroe led with a team-high 9 rebounds, Al Horford and Aron Baynes each pulled down 7 boards.