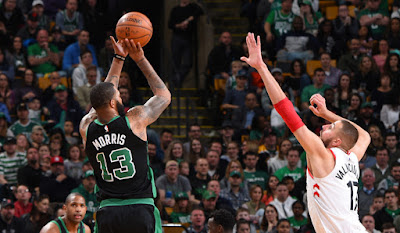 At the end of the opening frame, the least likely starter in Aron Baynes led the Celtics in scoring with a dozen points and Terry Rozier was right behind him with 10. The two best records in the Eastern Conference exchanged leads throughout most of the first half and when it felt like the Raptors were on the verge of grabbing their first double-digit lead of the night in the third quarter Tatum bridged the gap.

The rookie went off for 14 third-quarter points, including a pair of treys from behind the arc that cut into Toronto's six-point lead. By the end, Boston only trailed by a two points.

The Celtics then kicked off the final frame with a 10-4 run to grab a 94-88 lead. From there, Boston strung together a handful of defensive stops while Tatum, Rozier and Morris continued to attack offensively.

Boston held Kyle Lowry to 11 points on 4-of-12 attempts. DeMar DeRozan carried the scoring load with a game-high 32 points and Serge Ibaka finished with a double-double (15 points, 10 rebounds).

The C's at 53-23, have now close the gap to two-games behind the No. one seed in the East, as they will head out on the road for a back-to-back set that will start in Milwaukee on Tuesday against the Bucks and finish in Toronto for another showdown against the Raptors.

The Raptors were held to 99 points at the TD Garden, as they entered Saturday night as the third-best scoring team (112.5) in the league. The Celtics are now 35-4 when they hold their opponents to under 100 points.

Marcus Morris was ejected with 10.9 seconds left in the fourth after being hit with a second technical foul for arguing with Serge Ibaka, while shooting a pair of free-throws. Prior to being assessed the second tech, Morris was fouled by CJ miles and the two had some choice towards one another and both were hit with a double technical foul.