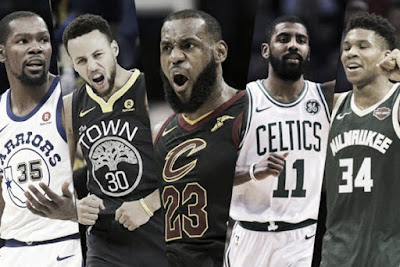 For the second straight year, we on the Causeway Street Podcast have debated on the Top-25 NBA players. This time around we have excluded players who have played less than 30 games (i.e. Kawhi Leonard, Gordon Hayward and Isaiah Thomas) in order to form our individual lists.

Without further adieu we bring you our countdown, beginning with Causeway Street Blog writer Zach Peloquin (who couldn't join us on the podcast) and his list breakdown, followed by everyone else:

Horford might be the game's most underrated player in 2017-18. His blend of passing, scoring, defense, and rebounding rivals that of Draymond Green but due to his lack of flashy numbers he ends up not grabbing headlines. Horford has grown into a perimeter threat and has fit into Brad Stevens system perfectly over much of the last two seasons.

Aldridge is back to his All-Star self this season, he has needed to lead the Spurs all season in Kawhi Leonard’s absence and has done a great job in doing so. Aldridge’s best years are likely behind him but he’s still a force when healthy.

Possibly the winner of the “best player on the worst team” award. Booker is quickly becoming a devastating scorer and a true number-one scoring option regardless of whoever is on the floor. The big question is, how does the rest of Phoenix Suns grow with this young superstar?

Zinga was on his way to a career year in his third NBA campaign but a knee injury derailed that. Health seems to be a growing concern for the unicorn but his game continues to develop into one of the tops inside out threats in basketball.

Green does all the dirty work in Golden State but finds little reward…besides winning. Dray may not be the scorer the other three Warriors' big four are but his leadership; toughness, defense, and rebounding make him one of the game’s most well rounded players.

Another controversial inclusion but Dipo has been outstanding in 2017-18. It may only be his first year playing at this level but his fantastic two way game should only grow going forward in Indy.

In only two years in the league and I’m sold. Embiid has every skill the modern NBA big needs and has plenty of confidence to boot. The biggest concern is his health going forward. If he stays on the court, he'll be a top 15 player next year.

Blake might have lost a step and been casted out to Detroit but he is still a prodigious talent. Griffin’s biggest weakness (lack of a true perimeter game) seems to be killing his value in today's NBA. BUT, with Stan Van Gundy having a chance to learn his game, maybe the move to Detroit can revive a once promising career.

This won’t be a popular placement for Beal but his game has impressed me all year. Especially with the injury issues with his running mate John Wall. Beal is one of the elite scorers in the NBA and when he’s going Washington is tough to beat.

Another elite two way player stuck on a squad that hasn’t seemed to change much since his arrival. Looking like he will get another shot at the playoffs, can Dame shock the world as he did in 2016?

Another Warrior in the top 25, as Thompson is one of the best two way players in the game. Problem is, he plays with Curry and Durant which make it impossible to tell how good he could be if he had his own team.

The double-double machine is slowly stepping into the NBA limelight and with Jimmy Butler in town to take the pressure off, KAT is getting very close to being one of the game’s elite big men. Expect him to jump a few more spots next season.

Wall is one of the game's top talents but something always seems to leave me wanting more. His play is stellar most nights and the numbers are typically very good but he always seems to come up short in the big games. The 2018 playoffs could be a good time to shake that tag.

P.G. has taken a seat behind Westbrook in OKC and it has made for an odd couple at times. The addition of Carmelo Anthony didn’t help the cause in getting George as many touches as he should be getting on a nightly basis. Though he's still a top player in the game but the move to OKC can be debated.

In his first full year in New Orleans, Cousins was his typical stat stuffing self. The issue? He was out of shape in a contract year. The lack of physical led to a torn Achilles that cost Cousins his second half of the 2017-18 season and likely a ton of money this summer.

Seeing him night in and night out you gain an appreciation for the skill of Kyrie Irving. His move to Boston has been a hit and once Boston can get a healthy Gordon Hayward back in the lineup, the East crown will likely be in Beantown for years to come.

One of the quietest superstars in the NBA. DeRozan has been one of the game’s elite for years but hardly makes headlines because of where he is and how he carries himself. This season's playoffs will need to be his moment to shine or forever be a great scorer…but not much else.

Leading the young T-Wolves, Butler was well on his way to one of his best seasons. Leadership and a veteran presence, Butler was looking for a shock run into at least the second round of the Western Conference playoffs prior to his knee injury.

Dutra was a year early on him but his predictions are coming true. The Greek Freak has been MVP worthy and is playing on a level that rivals Durant and James. He still needs some seasoning and a better supporting cast but Giannis has arrived.

Back to his MVP form of 2016, Steph is proving why he is still one of the game's top offensive threats of this millennium. Also in the MVP race but it will be hard with K.D. playing how he has on the same team.

While Davis’s Pelicans have struggled to get the wins earlier on, Davis is as good as he has ever been and could be a late season dark horse for the MVP if he can keep the Pelicans in the playoff picture.

Russ has taken a step back from his MVP season a year ago. With more talent around him he looks to be reverting back to his K.D. days, when he struggled to be a playmaker when the ball needs to be in others' hands. Still the league’s best true point guard but he’s been passed by a few this season.

The pre All-Star game MVP is the top offensive player in the league. Harden looks like the league MVP this season but the stretch run will tell us a lot about his growth since last season.

Durant is the “1B” this year. He has been a superstar and is evolving his game to include playmaking for his teammates and defensive prowess. James still holds the edge but it’s as close as it has ever been.

Still the game’s premier player. Not a career year but the last 15 or so games could get him back in the MVP race with a weaker than usual supporting cast.

Agree or disagree, let us know and give us your list. Click the player below to listen to our Top-10 countdown debate.