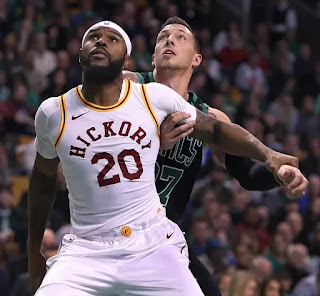 Daniel Theis suffered a torn meniscus against the Pacers Sunday night, and will undergo season-ending surgery.

Sources: Celtics center Daniel Theis has suffered a torn meniscus in his left knee and will undergo season-ending surgery. Theis emerged as an important reserve for Boston this season.
— Shams Charania (@ShamsCharania) March 12, 2018

Theis, who told NBC Sports Boston's A Sherrod Blakely he was planning on getting an MRI done Monday morning, suffered the injury Sunday night when he banged knees with Pacers guard Cory Joseph. Head coach Brad Stevens addressed the Theis' injury after Sunday's loss but didn't think it was a serious injury.


"He walked into the training room as I was leaving. He said he felt a little better," Stevens said. "I think he got kneed but I don't think that's anymore than a knee-to-knee or knee-to-thigh right above the knee."

Since the All-Star break, Theis has turned in some of his most impressive performances of the season. He will now be forced to sit while guys like Greg Monroe, Semi Ojeleye and possibly Guerschon Yabusele (who is currently in Maine playing in the G-League for the Red Claws) will see an uptick in their playing time for Stevens moving forward.