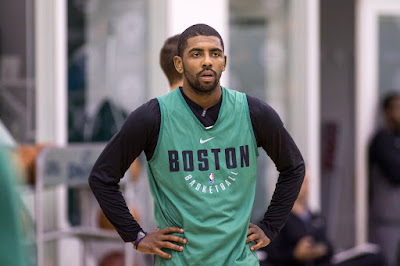 According to the Boston Herald, Celtics All-Star Kyrie Irving (sore left knee) will get a second opinion on Thursday.

Steve Bulpett reports that Irving, who has missed the last four games, will decide on either having a small procedure done on his knee to alleviate soreness, or continue to rest throughout the remainder of the regular season.

He may just need rest, but if physicians and Irving conclude he needs a procedure on his knee, expect his readiness for next season to weigh heavily on when to have it done. (Considering Celtics' chances this year after all their injuries, this should probably go without saying.)
— Steve Bulpett (@SteveBHoop) March 22, 2018


Irving suffered a fractured left kneecap during the 2015 NBA Finals, in which the then Cavalier missed five of the series' six games, while losing to the Warriors.

Since then, Irving has missed double-digit games in each of the last three campaigns (50 games total). But despite various missed stretches during this season, Celtics coach Brad Stevens has seen recent progress.


“That knee is still sore,” Stevens said. “He’s worked really hard to manage it throughout the entire season. He’s had some pretty good days recently. I’m encouraged by the big picture.”

Prior to the Celtics 100-99 win over the Thunder on Tuesday night, Stevens made it clear that he supports Irving getting a second opinion and that he's been out due to his knee being sore, thus not being to play at his usual high level.


“He’s out because of knee soreness, not because we’re choosing to rest him,” Stevens said. “That’s the bottom line. Again, we want him to feel 110 percent. He wants to feel 110 percent. Obviously, we’re fortunate we created a cushion early on in the year with playoffs and everything else. This is not one of those situations where we’re choosing to rest someone; it’s because he has a sore knee.”

The Celtics kick-off their four game road trip against the Trail Blazers in Portland on Friday night, as Irving will not travel with the team.