Isaiah Thomas on coming back to Boston: 'Anything can happen' 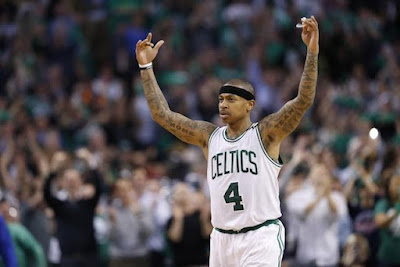 While conducting a random Q&A session on Twitter, Isaiah Thomas flirted with the idea of donning a Celtics uniform again.

Thomas, who will be an unrestricted free agent this summer, was asked if he would consider coming back to Boston during the offseason.


"Anything can happen," Thomas replied.


A surprising response from a guy who felt betrayed when the Celtics dealt him to the Cavaliers last summer for Kyrie Irving and stated he wasn't sure if he'd ever talk to Celtics president of operations Danny Ainge again. The two have spoken to each other via text since then, still, seeing Thomas not rule out the possibility of coming back to the Celtics is a shock.

With two max-deals under the cap in Al Horford and Gordon Hayward, along with Kyrie Irving's deal set to expire in 2019, the Celtics are in no shape to back up a Brink's truck for Thomas this summer. It was over a year ago that Thomas called himself a max-deal player, and he had a strong case as one of the league's leading scorer at the time but a lot has changed since then.

Thomas hasn't looked the same since coming back from a hip injury. He even touched on that during his Q&A, saying that when he saw how "everyone switched up on me," it was the biggest thing he learned this year.

That sparked a reply from a Twitter user who pointed to Thomas' stats as the biggest reason why he's not gaining the same support from fans this year that he saw last season.

u really expect everyone to look at you the same? lol gtfoh
— #DontDraftAllen (@HollywoodTales_) March 19, 2018

Thomas, a guy who doesn't hold back when it comes to Twitter beefs, had a witty reply for the young fella.


Give me the same opportunity I had last season and I’ll do the same stuff. You can’t compare this year and last year. My opportunity is totally different! Be a real student of the game and stop just looking at stats dumbass https://t.co/ckQbdODaKv
— Isaiah Thomas (@isaiahthomas) March 19, 2018


Without question, Brad Stevens' offense had a lot to do with Thomas' career year last season and it may be the biggest reason why Thomas doesn't want to rule out the possible comeback. However, the Celtics will have to decide if they want to bring back Marcus Smart before even thinking about Thomas, and they also have a guard in Terry Rozier who has flourished in his role off the bench -- which makes a potential Isaiah comeback less likely to happen.

Unfortunately for Thomas, the Celtics don't have enough space for him in the starting unit, therefore, a secondary scorer off the bench is the only ideal role Boston would be able to offer Isaiah if Ainge would ever consider bringing Thomas back to the Celtics.