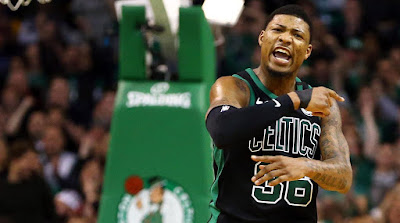 Celtics guard Marcus Smart may need season-ending surgery, but is hoping that won't be the case and is seeking a second opinion.

Smart, who suffered an injured right thumb Sunday night against the Pacers, wants to see how his hand responds within the next two to three days while seeing another doctor. Him and the Celtics want a second opinion, according to Boston Globe's Adam Himmelsbach.

The chances of Smart playing another game this season "doesn't look good," according to Himmelsbach's source, even though Celtics president of basketball operations Danny Ainge believes that "Anything is possible." Smart will meet with another local doctor Wednesday, where he will seek a second opinion before moving forward with surgery to correct a torn ligament in his right thumb.

That diagnosis came from Celtics team physician Dr. Brian McKeon, who says Smart will need a procedure done on his right hand. A surgery that can take up to 3-4 months to recover from.

Just over a month ago, Smart was sidelined with a self-inflicted right hand injury that required 20 stitches to close after doctors removed a piece of glass that nearly punctured tendons in hand. Smart's injury joins what has turned into a long list of injured Celtics players.

Jaylen Brown is still in the NBA's concussion protocol  program from his ugly fall against the Timberwolves, Kyrie Irving is battling soreness in his left knee, Al Horford has been feeling under the weather since last Sunday and Daniel Theis is out for the season with a torn meniscus. With Horford (questionable) as the only exception, all four of the aforementioned players will not be facing the Wizards Wednesday night at TD Garden.