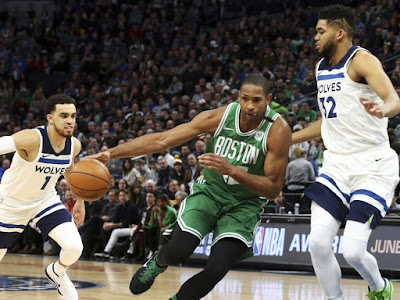 The Celtics topped the Timberwolves, 117-109 Thursday night at Minnesota -- their sixth win in seven tries -- and became the second team to clinch a playoff berth,  however, there was a unsettling feeling lingering towards the end of game. The well-being of Jaylen Brown hung in the balance in the second half as a frightening moment left players and fans in the Minnesota speechless.

Brown, who split two defenders in Andrew Wiggins and Tyus Jones, converted on a slam dunk before his hands slipped off the rim when he lost his balance and landed hard on his back/neck. Brown laid motionless for two-to-three minutes, a stretcher was brought onto the court before he was helped up and able to walk off on his own.

Brown exited the game with 14 points, 5 rebounds in 28 minutes.

Beforehand, the Celtics' offense ran like a well-oiled machine, specifically in the first half. Boston got off to a hot start -- tacking on 35-first quarter points before pulling ahead by 14 before halftime. Marcus Morris caught fire right out of the gate, converting three consecutive field goals in the opening frame, he led his team in scoring with 14 at the half as the second unit held its own.

Six was a common theme at the start of the second half. Boston scored six points in a hurry before missing six consecutive field goals -- that was when the Timberwolves took advantage by going on a 6-0 run and eventually pulled to within six points. Well, not quite (but almost), Minnesota sliced its double-digit deficit to seven moments before the scariest moment of the night took place on a transition play by Jaylen Brown with 1:31 left in the third quarter.

Kyrie Irving checked back in after an extended rest on the bench due to how well the second unit performed without their best player. Terry Rozier caught fire in the second half and so did Irving, specifically in the fourth quarter, alongside his All-Star teammate Al Horford.

The dynamic duo were in one fluid motion in the final frame -- they combined for 15 of the Celtics' 31 fourth-quarter points and shut the door on any potential Timberwolves comeback. Irving finished with a team-high 23 points, 8 assists and Al Horford stuffed the stat sheet with 20 points, 8 rebounds and 6 assists.

Nemania Bjelica had his best game of the season for the Timberwolves, scoring a career-high 30 points, including six 3-pointers to go with 12 rebounds. Taj Gibson's 18 points led the bench and Karl-Anthony Towns finished with a double-double (15 points, 11 rebounds).

What was most impressive about the Celtics' offense all night was the ball movement and how many guys were involved on the scoring end things as eight of 11 players had at least six or more points. With their only loss since the All-Star break against the red-hot Rockets (currently on a 16-game winning streak), the Celtics will look to carry their momentum back home this weekend when they host the Pacers at TD Garden on Sunday night.

The Celtics are still averaging 117 points a night since the All-Star break, while going 6-1 throughout that span.