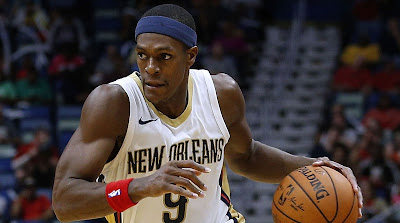 In case you haven't heard; former Celtics sharp-shooter Ray Allen has a new book coming out this month and excerpts have surfaced especially detailing his up and down relationship with Rajon Rondo.

Stories from Allen's book, "From The Outside: My Journey Through Life and the Game I Love," have made headlines this past week surrounding Rondo, Kevin Garnett and even Doc Rivers.

While Rondo, who's now a member of the Pelicans, has said he's moved on when it comes to 'issues' with Allen, he is also confused on why his name has even come up in connection to Allen's book.

Allen writes that Chris Paul would have been a Celtic in 2011 had it not been for Doc Rivers' friendship with then New Orleans Hornets/Pelicans coach Monty Williams, who he mentored and coached while in Orlando.

During the 2011-12 NBA lockout, reports of Rondo being dealt to New Orleans for Paul fell through due to Paul not willing to commit signing long-term in Boston.

According to Allen's book, he believes the deal didn't go through because "in the end, Doc decided he couldn't do that to their coach, Monty Williams."


"He just wants attention," Rondo told The Boston Globe hours prior to the Celtics tipping-off against the Pelicans. "I need actually some sales from [the book], only [publicity] it's been getting is from my name. I need some percentage or something. His people contact my people or something. The only pub I've been hearing about is when he mentions my name."

It's been well documented that Rondo and Allen didn't always see eye-to-eye throughout their five years together, especially when Allen bolted to Miami after the Celtics loss to LeBron James and the Heat in the 2012 Eastern Conference Finals, as that was reported as a key factor in Allen deciding to sign with the then rival.

A reunion of the 2008 championship Celtics team has been played for some time now and according to Rondo, he asked his former teammates if they wanted Allen to join, and some said no.


"Obviously that man is hurting," Rondo said of Allen. "I don't know if it's financially, I don't know if it's mentally. He wants to stay relevant. I am who I am. I don't try to be something I'm not. I can't say the same for him. He's looking for attention. I'm a better human being than that. I take accountability for my actions."

But despite the back and forth, Rondo is open to speak to Allen face-to-face to clear the air and mend fences, something Allen has never said publicly he's willing to do with any of his former Celtics teammates.


"I just want to talk to him man-to-man. I don't have a problem with the man," Rondo said. "I'll be the fall guy, but damn, now you in the book talking about this and that. And for me as a teammate, I probably supported [Allen] more than anybody on the team, all [his stuff] that [he] had going on in Boston. I wasn't mad that he went to Miami."

We shall see where this rollercoaster of the 2008 Celtics drama takes us next, as Allen's book is set to be released on March 27.

In the meantime, check out what the 'peacemaker' Paul Pierce had to say about Allen's words towards Rondo below: