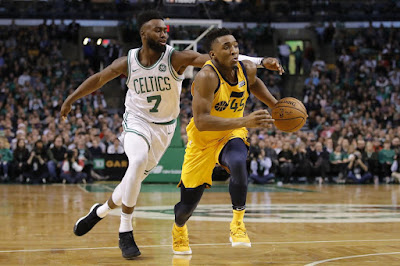 The Celtics, despite being depleted, will look to end their road trip finale with a victory and make it five-wins in a row, while the Jazz, who are currently in seventh out West, look to climb up the standings after winning 12 of their last 13 games.

Boston will be without Marcus Morris (right ankle sprain) and possibly without Al Horford (left ankle sprain), as he's listed as questionable, while everyone on the Jazz are healthy, including old friends Jae Crowder and Jonas Jerebko.


The Celtics' newest acquisition, Xavier Silas, who signed a 10-day contract, participated in the team's shootaround earlier today and is ready to go if called upon.


Our newest member of the team, Xavier Silas, says that since he’s older, he doesn’t feel the need to do too much during his 10-day. Says he just needs to give the team whatever Brad asks for.
— Boston Celtics (@celtics) March 28, 2018


Josue Pavón previews tonight's nationally televised matchup between the Celtics and Jazz with Andy Larsen of KSL.com. Tune in below to CLNS' pregame report below: