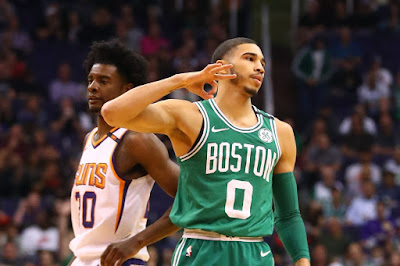 Boston claimed its fourth consecutive win against a team with the worst record in the league (19-56), however, it came at a price; another injured player. After scoring 20 points in the first three quarters, Marcus Morris sprained his right ankle when he took a buzzer-beating 3-pointer to end the frame and landed on Suns defender Troy Daniels' foot.

Daniels was whistled for the foul before Morris made all three free-throws and headed towards the locker room. X-rays came back negative but the Celtics will wait to see how it responds in the next coming days.

As for the game itself, Tatum and fellow 2017 draftee Josh Jackson put on a show. From the jump, the two exchanged baskets while Jackson scored the first 11 points for his team -- a somewhat impressive feat but not so much from a big picture perspective -- as Boston took an early 29-11 lead.

That lead was extended to 20 in the first half (39-19) -- Boston's biggest lead of the night -- before the Suns responded with a 15-3 run and then pulled to within three at halftime (48-45). Jackson and Tatum swapped field goals at the start of the third quarter before Daniels knocked in a pair of treys from behind the arc that gave Phoenix a three-point lead.

It turned out to be the largest lead of the night for the Suns. Behind Tatum, Morris and Terry Rozier, the Celtics grabbed a double-digit lead before the final frame -- where Al Horford put the finishing touches on a near triple-double night (19 points, 9 rebounds, 7 assists). Rozier added 16 points and 7 rebounds.

Tatum finished with 23 points on the night, and in doing so, surpassed the 1,000-point mark -- which made him only the ninth Celtics rookie to ever score 1,000 points, first since Ron Mercer's 1997-98 rookie campaign.

Jackson led the Suns with 23 points of his own, Tyler Ulis finished with 19 points and 8 assists off the bench and Daniels ended the night with 18, including 6-of-14 from deep.

The Celtics will look to sweep their four-game west coast trip Wednesday at Utah when they take on the Jazz.

Tatum is having the best month of his rookie campaign -- averaging 16.2 points, 6 rebounds while shooting 50 percent from the floor throughout March. He now joins names like Bob Cousy, Tommy Heinsohn, John Havlicek, Dave Cowens, Larry Bird, Antoine Walker, and Paul Pierce (to name a few) as one of the best scorers the Celtics have ever drafted.