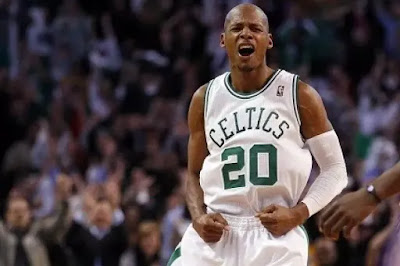 The Naismith Basketball Hall of Fame announced on Saturday that the 10-time All-Star will join Jason Kidd, Steve Nash, Grant Hill, Mo Cheeks and former Celtics players Dino Radja and Charlie Scott, along with seven others as part of the class of 2018.


This man rewrote the record books as one of the greatest shooters in @NBA history. He currently holds the record for most three-point field goals made at 2,973. We congratulate 2x NBA Champion Ray Allen. #18HoopClass


Allen, who played in the NBA for 19 seasons and is considered as one of game's best shooters of all-time, made stops in Milwaukee, Seattle, Boston, and Miami.

Despite being in the headlines as of late due to his controversial exit from Boston to Miami and rumored feuds with a few of his former Celtics teammates, as portrayed in his latest book "From the Outside: My Journey through Life and and the Game I Love" which was released on Tuesday, the C's would not have won banner 17 without Allen.

Allen's departure to the rival Heat after five-years, two NBA Finals appearances and one championship with the Celtics resulted in becoming a league champion for a second and last time, after hitting one of the biggest shots in Finals history against the San Antonio Spurs.


Ray Allen said Thursday: “Everything in my life I’ve always had some adversity that I’ve had to deal with. [This is a] nod that says, ‘Hey, you were great. You were awesome. You ended up being one of the best.’ And, at the end of the day, you did your job and you did it well.” https://t.co/WSJdyCRbqk
— Chris Forsberg (@ESPNForsberg) March 31, 2018


It's unclear which team Allen will be enshrined under, as he spent the first twelve-years of his professional career as a member of the Bucks (seven) and Sonics (five) before winning each of his titles in Boston and Miami.

Allen finished with career averages of 18.9 points, 4.1 rebounds and 3.4 assists per game, while shooting 45.2 percent from the field (40 percent from behind the arc) and 89.4 percent from the free throw line. He is also currently the all-time NBA leader in three-pointers made during the regular season (2,973) and the playoffs (385).