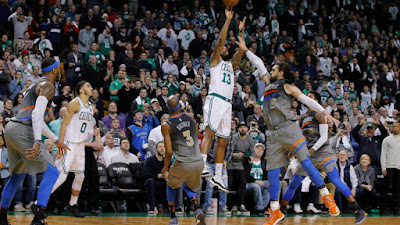 If you didn't watch the Celtics shocking 100-99 victory over the Oklahoma City Thunder on Tuesday night, you missed arguably one of the best games of the season. But according to the NBA, the win should have never happened.

The league released their Last Two Minute Report on Wednesday, where it states that Marcus Morris should have been called for a five-second violation on the final inbound-pass. Furthermore, the officiating report says Morris also travelled before the Celtics forward hit the game-winning three-pointer with 1.2 seconds left on the clock.

Boston trailed by six with 20 seconds left and crawled back to make it 99-97 after Carmelo Anthony missed a pair of free-throws. Following a Brad Stevens' timeout, Marcus Morris inbounded the ball with 7.7 seconds remaining. What is not clear in the video above, based on the NBA report if there was a clear five-second violation and a travel (since Morris takes a dribble and one step to the right before he takes the shot).

There have been worse missed or blown calls in the past, especially those that have gone against the Celtics, but watching it again, Morris seems to have executed nothing more than a great play without any violations.

What do you think? Did Morris travel or does any of this matter if Russell Westbrook or Anthony hit their free throws? Let us know below.