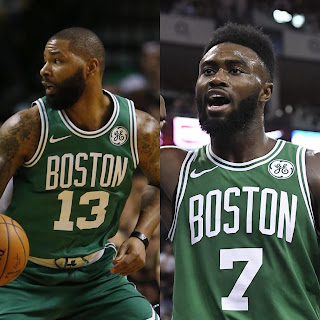 The Celtics will gain a starter while losing another, as the team has announced that Jaylen Brown (concussion) will return against the Sacramento Kings and Marcus Morris will sit out with a sprained right ankle.


#NEBHInjuryReport for tonight’s game in Sacramento:


Morris hurt his ankle in Friday night's Celtics comeback win over the Trail Blazers, where he finished with a game-high 30 points. No timetable on his return has been set by the team, while Brad Stevens said the forward should be "back sooner rather than later," in his pregame presser.


#NEBHInjuryReport: Jaylen Brown is back and will start tonight against the Kings. Marcus Morris is out with a sprained ankle but should “be back sooner rather than later,” says Brad Stevens.
— Boston Celtics (@celtics) March 25, 2018


You could argue that Morris single-handedly has won the Celtics' last two games, while averaging 21.6 points on 51.7 percent shooting from behind the arc in his last five outings.

Meanwhile, Jaylen Brown, who has missed the last six games, while the Celtics are 3-3 in his absence, rejoins the starting lineup after being under the NBA's concussion protocol due to a scary fall in Minnesota back on March 8.

Despite the Celtics having a depleted roster at the moment, they will look to finish their last 10 regular season games on a high note.

The Celtics tip-off against the Kings at 6 P.M. EST, as the second tilt of their four-game road trip.