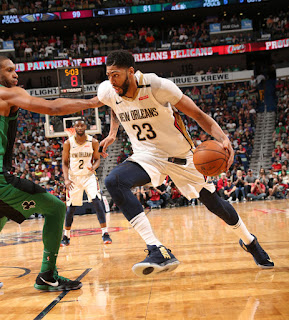 Anthony Davis reminded the Celtics why he's the most dominant big man in the league Sunday night, while Boston's shortcomings on both ends of the floor proved to be a recipe for a blowout loss at New Orleans.

Davis' double-double (34 points, 11 rebounds) headlined a 108-89 win over the Celtics, Boston's third loss in four tries. The Celtics struggled to contain The Brow throughout the night, but hung around in the third quarter after the Pelicans erased Boston's nine-point lead.

After Davis tacked on 19 first-half points, the Pelicans grabbed an 11-point lead in the third quarter where they added 35 points before the final frame. Boston managed to trim its deficit to seven before the fourth quarter, thanks to Jayson Tatum, who was heating up through the first three quarters.

Tatum scored seven of his 23 points in the third quarter, connecting on shots in the paint, a jumpers inside and outside of the arc, and kept the C's afloat. However, it turned out to be his final points of the evening.

The Pelicans kicked off the final frame with 19-5 run through the first seven minutes and wiped the floor with the Celtics on their way to a 26-13 fourth quarter. New Orleans' big men benefited off of mismatches down low as guys like Cheick Diallo and Nikola Mirotic dominated over the smaller Celtics guards and forwards in the paint on backdoor cuts to the rim.

Mirotic finished with a double-double (16 points, 10 rebounds) and Diallo added 17 points off the bench while old friend Rajon Rondo dished out a game-high 11 assists.

Al Horford struggled to keep Davis in front of him on defense and he wasn't the only one. When Brad Stevens turned to Greg Monroe for help, he looked lost on defensive switches as the Pelicans used the pick-and-roll to create mismatches and backdoor screens to open up great looks for Davis.

Horford also couldn't find the bottom of the net for the Celtics. He finished with six points on 3-of-11 attempts.

Marcus Morris added 17 points, 6 rebounds, Terry Rozier stuffed the stat sheet with 13 points, 7 rebounds and 5 assists but their offense cooled off by the start of the fourth quarter when Boston needed it the most. Monroe chipped in 12 points, 6 rebounds but not being able to slow down the Pelicans throughout their second-half run ultimately dug themselves in for a loss to a team that's fighting to stay in the Western Conference's playoff picture.

The Celtics will head home for a matchup against a team that's also in a playoff race out west. The Thunder are fighting for positioning in the upper echelon of their conference and will enter TD Garden Tuesday night riding high on a six-game winning streak.