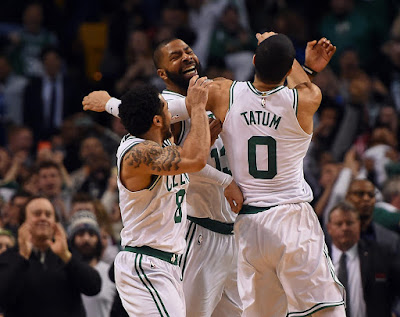 For a depleted Celtics squad facing off against the white-hot Oklahoma City Thunder -- a team that entered TD Garden on a six-game winning streak -- Boston was going to need a dramatic flare from its group Tuesday night and that's exactly what they got.

Carmelo Anthony misfired on a pair of free-throws that gave the Celtics life with 7.7 seconds left, facing a two-point hole. After rookie Jayson Tatum attempted to go for a game-tying layup but ran into a wall, he instead found Marcus Morris behind the arc.

Morris gave his defender a pump fake, took one dribble to his right before releasing an off-balance 3-pointer that dropped through the net with 1.8 left on the game clock that sealed a 100-99 win for the Celtics.

The C's had no business winning this game, especially after facing a six-point deficit with only 24.7 ticks left when Tatum's made field goal brought his team back in it before Russell Westbrook split a pair from the charity stripe.

Terry Rozier's 3-pointer carved the Thunder's two only two before Anthony's collapse at the free-throw line gave Morris his opportunity to knock off Oklahoma City with a game-winner.

Tatum scored a team-high 23 points to go with his 11 rebounds, Morris finished with 21 points and Greg Monroe led the second unit behind his 17 points.

Paul George and Steven Adams combined for 16 of the Thunder's 26 points as Oklahoma City took a 26-18 lead into the second quarter. But Boston's second unit quickly responded, led by Monroe, who took advantage of the Thunder not boxing him out down low and converted three offensive rebounds into six points.

Monroe's scoring coupled with a 3-pointer from Abdel Nader helped cut Boston's deficit into a one-possession game (29-32). Later came a Terry Rozier sequence where he pulled up for a 3-pointer, stole the ball on the other end and weaved through Thunder defenders for an easy two.

Boston briefly regained their lead from the first quarter before heading into the break trailing the Thunder, 48-45. A back-and-forth third quarter that was highlighted by Westbrook's 12 points, set the stage for a compelling final frame as Shane Larkin's buzzer-beating 3-pointer cut the Thunder's five-point lead into two.

Westbrook's finished with a game-high 27 points, George scored 24 points and pulled down 13 rebounds while Anthony finished with 13 points.

Clinging onto a one-point advantage in the final minutes (82-81), the Celtics failed to convert three consecutive shots from deep before the Westbrook and Anthony connected on back-to-back treys as Oklahoma City pulled ahead by five. Brad Stevens wasted no time in calling a timeout to insert Tatum back into the game and the rookie made his presence felt by immediately draining a 3-pointer.

Anthony answered Tatum with one of his own and so did his teammate Corey Brewer. The late-fourth quarter turned into a shootout between the two teams with the Thunder momentarily keeping the Celtics at bay before Boston put together one heck of a run in the final minute that ending with a game winner.

Boston will take the momentum of its incredible victory on the road with them when they head out west for a four-game road trip.

The Celtics out-rebounded the Thunder, 52-44. The key possessions down the stretch created themselves off of big defensive rebounds that led to quick scoring by the C's. Boston has now beaten the top four Western Conferance teams at home (Houston, Golden State, Portland and Oklahoma City) after coming back from a double-digit deficit and become the first in the NBA this season to win a game after being down six with 20 seconds left.