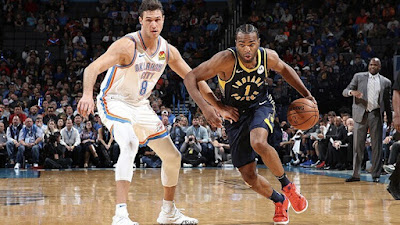 The Celtics are seeking another scorer off the bench following their loss to the Golden State Warriors in the NBA Finals.
While head coach Ime Udoka would prefer improvements be made internally when it comes to the second unit, C's president of basketball operations Brad Stevens is clearly keeping his options open with the offseason underway.
So who is Boston targeting come free agency, which will tip-off Thursday night at 6:00 ET? Well according to Jake Fisher of Bleacher Report, veterans Danilo Gallinari and TJ Warren have been rumored to be linked to the Celtics to possibly fill the role of bench scorer.

"Boston appears focused on high-scoring, small-ball forwards for the Celtics' mid-level," Fischer reported Wednesday. "They have been linked to Danilo Gallinari and T.J. Warren, among others. Gallinari is also expected to draw interest from Miami should it lose P.J. Tucker."

Gallinari, who was traded from the Atlanta Hawks to the San Antonio Spurs Wednesday afternoon for All-Star guard Dejounte Murray, is owed $21.5-million on the last year of his current deal and the Celtics would definitely be interested if he were waived.

League source confirms report by @JakeLFischer that Celtics are interested in signing Danilo Gallinari if he is waived by San Antonio.

At age 34, Gallinari averaged 11.7 points and 4.7 rebounds this past season, while shooting 38.1% from deep. He'd be a perfect fit into the Celtics offense and another outside scorer, as Gallinari has hit 38.2% of his 3-point attempts during his 13-year career.
Warren at 28 years-old is unrestricted free agent and a 6-foot-8 forward who has averaged 15.5 points over his seven years in the league, including 19.8 points per contest during the 2019-20 campaign with the Indiana Pacers. Though he hasn't played since the 2020-21 season (limited to just four games due to a broken foot), if healthy he could be a great addition to the Celtics' bench.
With Boston only being able to offer their taxpayer midlevel exception of $6.4 million to any potential free agent target, it should be interesting to see who's willing to sign with an already contending roster while most likely taking a pay cut.
Joel Pavón
Follow @Joe1_CSP