Jayson Tatum on the loss in his first NBA Finals appearance: 'It hurts' 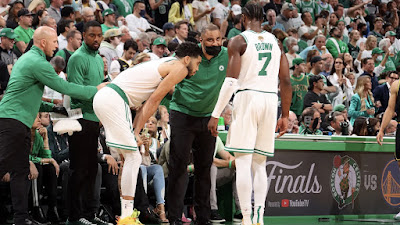 The Celtics fell two wins short of an NBA title after a 103-90 loss in Game 6 to the Golden State Warriors at TD Garden Thursday night.
For All-Star Jayson Tatum, who made his first NBA Finals appearance, he put it as simple as he could when asked how he felt following a 13-point performance on 6-of-18 shooting in the most important game of the season.
"It hurts," said Tatum, who despite having seven assists, he had only three rebounds, while turning the ball over five times in Game 6, to tally 23 total turnovers for the series. The Celtics forward also became the first player in league history to record 100 turnovers in a single postseason.

Tatum's 21.5 points average in the NBA Finals was far below his over 28 points average (on 45% shooting from the field) per contest through the first three rounds of the playoffs. But in the last six games of the postseason, the All-NBA First-Team selectee's shot percentage dropped to below 36.2% from the floor, including 31.6% from two-point range and only connected on 65.6% from the free throw line.
Still, at age 24, Tatum did become the youngest player in NBA history to reach 600 points, 100 rebounds and 100 assists in a single postseason, while logging in 983 minutes -- the most by far of any player this year (with Jaylen Brown in second at 920) and the most any player has played in a single playoff run since LeBron James achieved the same feat back in 2012.
While many may categorize Tatum's shortcomings in the NBA Finals as a failure, you can't forget what he did accomplish that led the Celtics to the championship round for the first time in 12 years to begin with. He led all players this postseason in points and assists on his way to beating Kevin Durant, Giannis Antetokounmpo, Jimmy Butler and winning the first Larry Bird Eastern Conference Finals MVP.
Such memorable performances throughout Tatum's playoff run include, his Game 1 buzzer beating layup to beat the Brooklyn Nets in round-one, going off for 46 points in a do-or-die Game 6 against the Milwaukee Bucks, recording a career-high 13 assists in his NBA Finals debut and playing back-to-back Game 7s.

"Learn and understand who he is in this league. You're an All-Star, All-NBA first-team guy for a reason. This is only the start of how you're going to be guarded and the attention you will draw," Ime Udoka said of Tatum during his postgame presser. "I think this is the next step for him. Figuring that out. He's hurting, but he's a great player. High IQ player. He'll use this to propel him.
"For him, it's just continuing to grow and understand you're going to see this the rest of your career. This is just a start."

As far as Tatum's teammates, they couldn't be anything but positive on the season and the overall growth of what they have gone through in hopes that will fuel them to get back to the Finals and win.

"I just gave him a hug, man," Jaylen Brown added of Tatum during his postgame comments. "I know it was a tough last game. It stings that we kind of didn't play to our potential. But it is what it is. You got to learn from it and move on. As tough as it is, it's been a great year. It's been a great journey."

Even a 15-year veteran like Al Horford, who also made his first NBA Finals appearance, can appreciate the good over the bad, despite a disappointing end to the Celtics season.

"I want us to keep perspective on how much growth Jayson and Jaylen had this year," Horford said to reporters Thursday night. "There's a lot on their hands, a lot of responsibility. They took it in stride. They made adjustments. They improved. They grew as players."

Of course if anyone knows about what it takes to get within two wins of a championship, it would have to be the longest-tenured Celtic in Marcus Smart, who also made adjustments as the team's starting point guard this season.

It's safe to say the future looks bright, especially for Tatum who continues to carve out his own path to greatness even if it hurts along way, anything worth having is definitely worth fighting for.

"You don't want to feel like this again," Tatum said after Game 6. "But you want to get back here...Yeah, it's going to fuel us."