Off-season Preview: What's next for the Celtics? 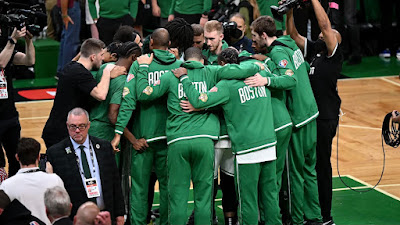 Soaking in the moment of an agonizing Game 6 defeat on his home court, Jayson Tatum overlooked the Golden State Warriors' celebration of their fourth title in eight years.
After an exhausting run to the NBA Finals, returning for the first time in over 12 seasons, it was a difficult moment for Tatum along with his teammates to get all the way to the biggest stage, and not deliver another championship to the city of Boston.
Visibly upset, Tatum and Marcus Smart were both devastated from the outcome.

"It's tough. Every obstacle that was thrown at us, we prevailed and tried through it. Came up short tonight," said Smart during his postgame presser.

Knowing all the ups and downs the Celtics juggled this season and how the team came together, the loss left a bad taste in Tatum's mouth.

"I just keep saying it hurts. Being with this group, the things that we've overcome throughout the season to get to this point," said Tatum in his postgame comments. Just knowing how bad we wanted it and coming up short. It's a terrible feeling."

Although the Celtics turned the season around and gave fans promise for the future of the team, this offseason will raise plenty of questions. Teams like the Miami Heat, Milwaukee Bucks, and Brooklyn Nets (depending on the Kyrie Irving/Kevin Durant situation), will all return to being legitimate threats in the Eastern Conference. How will the Celtics match up to healthier teams if they only make minor improvements? Will they need to make more significant changes to the roster?
The Celtics' bench clearly needs an upgrade, and scoring will definitely be an emphasis to help take some burden off Boston's two stars. Playmaking will also be important to address, and will likely need to come off the bench with the starting-5 set.
However, there will likely be a repeat question circling around Smart of whether they can legitimately upgrade the point guard position or are better off keeping him around.
The reigning Defensive Player of the Year showed his value on the defensive end, but questions will arise whether he’s the right point guard for them moving forward.
With limited cap space to work with, his contract along with Al Horford's expiring deal will be the most talked about storylines this offseason. With an uneventful NBA Draft, Boston will turn their attention to trades and the free-agent market to improve the team.
We'll take a dive into those questions as one of the most important off-season's for the Celtics approaches.

Who Could Be Dealt?

It's safe to say Jayson Tatum and Jaylen Brown are on the untouchable list. As for the rest of the roster, there remains a lot of questions about who should stay on the roster.
Grant Williams showed flashes this season highlighted by his Game 7 performance against the Bucks in the Eastern Conference Semifinals, but almost disappeared in both the Eastern Conference Finals and the NBA Finals.
Marcus Smart, who has been subject to plenty of trade rumors throughout his eight seasons with the Celtics, is once again in the conversation.
Payton Pritchard and Aaron Nesmith who were both drafted in the first round in 2020, have found themselves as end of the rotation players with little upside.
With all that said, who could be available for trade to upgrade the roster?
All of these players could be in the conversation but Marcus Smart seems to be the least likely. While the Celtics do lack a true playmaking point guard to settle down and control the offense, it will be difficult to find someone who will 1. -- be available or 2. -- will be a significant upgrade.
That leaves players like Grant Williams, Daniel Theis, Neismith, or Payton Pritchard to be potential players on the move.
Theis gave the Celtics some depth in their front court last season with Robert Williams missing time, but struggled to make an impact during the playoffs. Projected to be owed $8.7 million this season, Theis will likely be at the top of the list to shed some salary if someone becomes available.
As for Grant Williams, don't be surprised to see him in trade talks. He showed his value defensively during this year's playoff run, but is one of the few remaining assets the Celtics can use to upgrade the bench more.
He improved as a three point shooter last season shooting 41.1% from deep and gave Boston some flexibility on the defensive end, but was still very inconsistent -- which showed during the end of the Celtics finals run. Since his 27-point outburst against the Bucks, Williams only scored 10 points or more four times for the remainder of their playoff run.
Entering the final year of his rookie contract, the Celtics may search for another wing if they can't reach an agreement on a new deal. With Williams' value at its highest now, it wouldn't be a bad idea to gauge other team's interest in the 24-year-old if it means bringing more offense to the bench for Ime Udoka.

The Celtics enter the off-season with three trade exceptions they could use -- a $17.1 million exception from the Evan Fournier sign-and-trade deal, a $6.9 million exception from "Hustle" star Juancho Hernangomez, and $5.9 million from Dennis Schröder.
The Fournier exception is obviously the most valuable for the Celtics who lack the ability to sign anyone outright outside of the mid-level exception. That makes using the exception before its expiration date on July 18 so much more important. They could also use that exception to add multiple players in two separate deals so Brad Stevens could get creative this offseason.
With that said, who could they possibly target to fit that exception?
A few names that come to mind are Kevin Huerter, Norman Powell, Terrence Ross, and even Josh Hart.
Not all of these players may be available but they will certainly be players The Celtics could discuss trading for if they become available.
One of the more interesting potential targets for the Celtics to be Kevin Huerter. While he's not as valuable on the defensive end he'll bring the Celtics shooting they desperately need off the bench. When Boston's offense was stagnant they didn't have anyone outside of Brown and Tatum to create their own shot. Huerter has the ability to make shots off the dribble and in catch and shoot situations -- something that would give the Celtics a huge boost next season.
There's no guarantee the Hawks would even be interested in parting with him as his shooting is extremely valuable next to Trae Young. However, if the Hawks wanted to clear some cap space, Boston would give them the opportunity to do that.  They would obviously need to give something of value back to Atlanta, but the Celtics could make it work with future picks and some rotational pieces.
Terrence Ross is another interesting player that could fit the Celtics needs. Although he didn't showcase crazy scoring numbers this season at only 10 points a game, he's proven to be a very solid defender.
Posting a defensive rating of 115.9, Ross fits right into what the Celtics need -- someone that can provide a spark off the bench while bringing some energy on the defensive end. He is entering the final year of his contract so the Magic likely wouldn't command much.
One of Boston's biggest needs this off-season is scoring and adding a player like Ross wouldn't be a bad start.
Norman Powell is another name that fits the mold of this Celtics team. As a champion with the Toronto Raptors, Powell knows what it takes to win a championship.
He is an efficient scorer and brings a lot of energy on the defensive end, which will fit right into the Celtics' identity. It may be tough to pry him away from the Clippers who also have championship aspirations, but if they want to clear cap space, Boston could be a potential destination.
Even if that means they have to give up some of their rotation players and picks, It'll be worth it for the Celtics who need to add more wing depth and scoring.
While there is a long list of players the Celtics could target using any of these exceptions these are just a few players that could fill needs.
If the Celtics aren't able to find trades for young promising players, adding some veterans to the roster could help bring some experience to the team. That leaves players like P.J Tucker and Patty Mills as potential targets.
Other potential targets: Cam Reddish, Patty Mills (veteran presence), Malik Beasley

The Celtics have plenty to talk about this off-season to keep themselves into contention next season and it’ll start with some tough decisions.
Boston likely will try to keep its main core intact but it shouldn't rule out getting rid of some rotational pieces for the right price including Marcus Smart.
We've seen this before with young teams who make deep playoff runs and come back down to earth the next season. If Boston wants to return to the Finals and take the next step they need to make a significant upgrade with their second unit and prioritize adding some playmaking.
With a competitive Eastern Conference the Celtics may need to make more than a few tweaks. They have the coach, they have the two stars, they just need to find that third option offensively to get them over the top.
We saw how valuable it was in the Finals to have that third scorer to take over games when the stars were struggling With Andrew Wiggins.
Tatum and Brown can only do so much by themselves. Now it's up for the supporting cast to step up their game and really push the Celtics over the top. Whether those players are on the roster or not, Brad Stevens will need to maximize Boston's title window before it's too late.
After a long season and understanding what it takes to just get to the Finals, the Celtics know they have to do a lot more if they want to accomplish the ultimate goal.

"It's hard. It's hard getting to this point, it's even harder getting over the hump and winning. It's been a long journey, a long process. That's what I took from it, it's tough and you got to take it up another level to do what we want to do," said Tatum following Game 6.

With the start of free-agency looming, Boston needs to look up and down their roster and decide which players will help raise banner 18 at TD Garden.
Ian Carrano
Follow @IC_Sports1