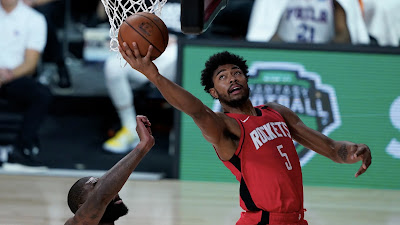 The Celtics and free agent forward Bruno Caboclo have reportedly agreed to a training camp deal, according to Shams Charania of The Athletic.
The 26-year-old has 105 games over the past seven years of NBA experience, since being drafted by the Toronto Raptors with the No. 20 pick in the 2014 Draft. After being waived by the Raptors, Caboclo has played for the Sacramento Kings, Memphis Grizzlies and most recently with the Houston Rockets.
Caboclo spent the 2020-21 season playing abroad in France, before ending up back in his native Brazil during this past 2021-22 campaign, where he has improved on his shot and defense.
The 6-foot-9 big man played for the Utah Jazz in both Utah and Las Vegas Summer Leagues last month, averaging 12.0 points, 6.4 rebounds and 1.2 blocks in 22.1 minutes per contest (five games).
Caboclo, who will have a chance to fight for a roster spot, has career averages of 4.2 points, 2.6 rebounds in 12.3 minutes per game. Boston still has five open slots on their 20-man training camp roster.
Joel Pavón
Follow @Joe1_CSP