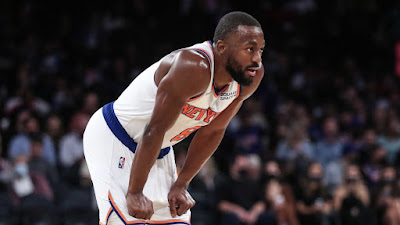 Former Celtics All-Star guard now turned New York Knick Kemba Walker has revealed how he ended up signing with the team he grew up rooting for.
While making a recent appearance on ESPN insider Zach Lowe’s podcast, Walker spoke about how things came to an end in Boston over the summer, as he was traded along with the No. 16th pick in the 2021 NBA Draft to the Oklahoma City Thunder in exchange for veteran Al Horford and Moses Brown.
According to Walker, despite not knowing he was going to be moved, the Bronx native says he did enjoy his time as a Celtic.

"My time there was great," said Walker via The Lowe Post Podcast. "I had great teammates. I talk to those guys all the time, still to this day. To be honest, I didn't know I was going to be traded."

Walker once again refuted a story by Bleacher Report's Farbod Esnaashri prior to being dealt that he and the Celtics had mutually agreed to part ways -- a report that Walker strongly denied, even though he was eventually traded.

Following a buyout from the Thunder, Walker agreed to a two-year, $17.8 million deal with his hometown Knicks and will be facing his former teammates come Wednesday when New York host the Celtics at Madison Square Garden in both teams' regular season opener.

"I would be absolutely lying if I said I wasn't looking forward to this first game and the crowd is going to be absolutely crazy in there," Walker said. "I've seen the playoffs, I've seen those guys play against the Hawks last season and I’ve seen how intense the crowd was. So, I could only imagine this season. Having the same guys and adding Evan (Fournier) and myself. I'm from here, which is going to bring that extra loudness to the arena. It;s going to be insane and I can't wait."

After coming off two injury riddled seasons due to an ailing knee, Walker says he's feeling great ahead of the 2021-22 campaign and is ready to prove to the naysayers that he's finally healthy.