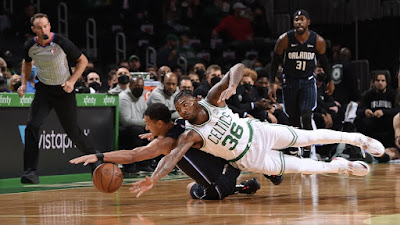 It was as rocking as the TD Garden has been in a while, as the Celtics opened up their preseason with a 98-97 comeback win over the Orlando Magic Monday night.
Romeo Langford hit the game-winning 3-pointer with 13.8 seconds left after making a crucial steal to secure the possession.
Payton Pritchard (nine points, five rebounds, five assists) missed a pull-up jumper from the free throw line with 20 seconds remaining and the ensuring rebound went off of Enes Kamter's hands before the ball headed towards the Magic's bench. Orlando's Hassani Gravett tried to save it from going out of bounds to teammate Adrimal Schfield, but Langford picked off the pass and gave it to Pritchard.
The Celtics second year point guard rewarded Langford's hustle by hitting him with a pass and the wing didn't hesitate, as he let it fly to give Boston its first lead since the opening minutes of the second half.

Lanford's stats read seven points (2-of-2 from 3), two rebounds and a steal in 10 minutes of action -- all coming in the final frame.

"To sit there for three quarters and to come in and play the way he did in the fourth quarter is obviously good for him and good for the team, but it should give him a huge confidence boost," said Celtics coach Ime Udoka of Langford after the game. "He was able to hit some big shots late. He was extra aggressive. He did some things well, and had a few back cuts on defense, but we'll clean those things up."

Jaylen Brown, who played his first game since returning from wrist surgery back in May, finished with a game-high 25 points on 8-of-16 shooting from the field. He spoke about his left wrist feeling 80-85 percent healthy, noting that he did get hit once and it hurt after the adrenaline wore off.

"As the season goes on, it's going to get better," Brown said during his postgame press conference. "So today was a good test."

Meanwhile, Jayson Tatum added 18 points, nine rebounds and Aaron Nesmith chipped in 10 points as the only other ones to reach double-digit scoring for the Celtics, who are 1-0 in preseason play.
Cole Anthony (six assists, six rebounds) and former C's center Mo Wagner each lead the Magic with 16 points apiece. Mo Bamba recorded a double-double of 13 points, 10 rebounds and Wendell Carter Jr. added 10 points, eight rebounds in the loss.
After leading 52-50 at the break, the Celtics trailed by as many as 11 in the second half before the starters of Tatum, Brown, Marcus Smart, Juancho Hernangomez and Robert Williams, plus Al Horford, Josh Richardson and Dennis Schröder were all subbed out for good -- as no one played anymore than 26 minutes for Udoka.
The Magic led 87-76 with 9:02 left in the fourth quarter, as a Kanter bucket would spark a comeback and eventually cut Boston's deficit to five with 5:11 left to play.
In the end the Celtics had all the momentum -- using a 22-10 run to wrap up the victory, despite Orlando getting one last shot in the final 6.6 seconds to win the game, but a 29-footer just rimmed out as the clock hit triple zeros.

"It was a pretty ugly win overall," said Udoka. "But we made them late when it counted."

Boston turned the ball over 16 times (14 in the first half), shot 35.2% from the field and 35% from 3. They also finished with 51 rebounds and 19 assists on 32 made baskets.
Orlando shot 40.4% from the floor and went 17-of-42 from behind the arc, while grabbing 50 rebounds and assisted 25 times on 36 made buckets -- but had 19 total turnovers on the night.
The Celtics are off until Saturday night when they host the Toronto Raptors for their last preseason matchup at home.
Joel Pavón
Follow @Joe1_CSP