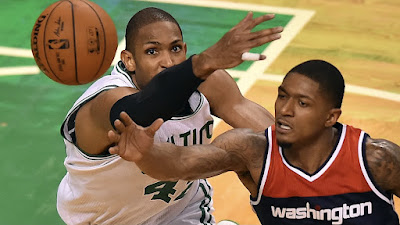 Al Horford has been listed as probable for tonight's home game against the Washington Wizards, after sitting out of the Celtics 140-129 overtime win over the Charlotte Hornets Monday with an adductor strain.
The 35-year-old veteran has only played in two out of the four total games this season following a stint on the league's Health and Safety Protocol during training camp. The team is bringing Horford back into the rotation slowly, as he registered 25 minutes in the blowout loss to the Raptors and 30 in the Celtics first win of the season against the Rockets.

#NEBHInjuryReport for tomorrow night vs Washington:


In two games as a start, Horford is averaging 14.5 points and 10.5 rebounds per contest. The former All-Star forward has already shown his importance to this Celtics roster going forward. Despite only playing 28 games last season in Oklahoma City, Horford has looked like a younger version of himself in a small sample size so far in his return to Boston.

"He's doing great. Defensively, we can switch with him or have him back in a drop coverage. He covers a lot of holes in every way, assist-wise, leadership, shooting the ball, passing, and all that," Ime Udoka said on Sunday night. "Like I said, he's a huge complement for our guys, kind of a stabilizer for our guys, kind of a glue guy for our group."

Romeo Langford, who has missed the last two games, is still listed as questionable with tightness in his left calf.
Joel Pavón
Follow @Joe1_CSP