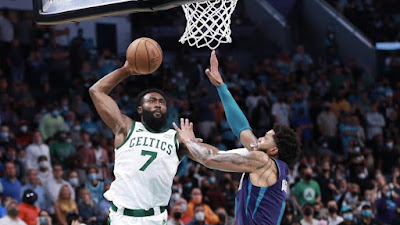 The Celtics handed the Charlotte Hornets their first loss of the season in a comeback 140-129 overtime victory at the Spectrum Center Monday night.
In a game that featured 28 lead changes, Jayson Tatum scored a season-high 41 points on 14-of-28 shooting and 6-of-12 from 3, while dishing out eight assists -- one of which was a lob to Jaylen Brown for an emphatic one-handed dunk over Miles Bridges.

"That was big time," Tatum said in his postgame presser of the alley-oop to Brown. "But we expect that out of him."

Tatum's playmaking was huge for the Celtics down the stretch, as the All-Star also grabbed seven rebounds in the win.

"I pride myself on being able to do it all on the court," said Tatum. "I know I'm going to draw a lot of attention and that opens other guys up. I want to make those plays to get them the ball."

Brown finished with 30 points on 12-of-20 from the field, nine rebounds, three steals and a block in 38 minutes. After sitting out with knee tendinitis in Sunday's win over the Rockets, the Celtics wing was happy to get back a dunk he missed in last week's overtime loss to the New York Knicks.

"Miles is obviously one of the better athletes in the league so I know if I tried to lay it up he was going to send it back to Boston," Brown said during his postgame press conference. "So I went up with bad intentions."

With Al Horford (groin) out Dennis Schröder made his second straight start, as he netted eight of his 23 points in overtime. The veteran guard also dished out eight assists and grabbed six rebounds, while Robert Williams added 12 points, 16 rebounds.
For the Hornets, Bridges recorded 25 points and 10 rebounds, while LaMelo Ball also scored 25 points to go along with his nine assists. Kelly Oubre Jr had 19 points and former Celtic Gordon Hayward chipped in 15 points, as Charlotte is now 3-1 on the young season.
Both teams were playing on a second night of a back-to-back and it seemed like the Hornets were going to run away with the win, until the Celtics erased a 12-point deficit to take a one-point lead with 2:03 remaining in the fourth quarter.
Following a Robert Williams dunk, the Celtics were up one before Ball nailed a 26-footer to put Charlotte ahead by two. Tatum hit two free throws on the other end to tie it 122-122 with 1:11 left in regulation.

"We don't love these overtime games, but it builds toughness mentally as well as getting in shape and playing through these," said Celtics coach Ime Udoka. "But we just keep chipping away. We jumped it up a little bit and did a few different things trapping wise and sped them up and the guys had to obviously make shots on the other end."

Both clubs had a chance to win the game at end of the quarter but neither could hold on to the ball while trying to inbound it and no team got a shot off in the period's final 15 seconds.
The Celtics scored the first two buckets in overtime to lead by four before Bridges made a jumper and another Ball three, plus a couple of made free throws gave the Hornets a three-point advantage.
That would be the last points for Charlotte, as the Celtics used a 14-0 run to wrap up the OT which was kicked off by back-to-back 3s by Schröder and Brown -- to set up the play of the game with 1:21 left -- despite only being up five, Boston took the air out of the Spectrum Center to win their second straight.

The Celtics head back home to host the Washington Wizards (2-1) at TD Garden on Wednesday, tip-off is at 7:30 PM ET.
Game Notes:
Boston shot 49.5% from the field and 19-of-50 (38%) from behind the arc, while the Hornets were 44.7% from the floor and 43.2% from 3. The Celtics also had 33 assists on 50 made baskets and committed 12 turnovers on the night.
Jabari Parker, who was waived and then re-signed by the C's in less than 48-hour span at the end of training camp, played his first game of the season -- scoring 13 points, grabbing five rebounds and blocking a shot all in 17 minutes of the first half.
Joel Pavón
Follow @Joe1_CSP