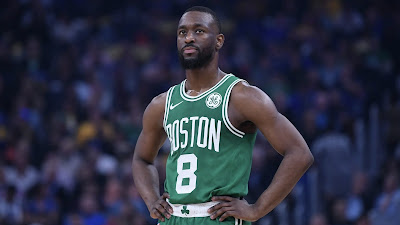 On Wednesday a report surfaced that Kemba Walker's relationship with the Celtics was likely coming to an end soon.
According to Farbod Esnaashari of Bleacher Report, Walker and the Celtics had mutually come to an agreement to part ways this summer. However, Chris Gasper of Boston's WCVB SportsCenter 5 says team sources call the rumors "total garbage" and not true.

The team source also told SportsCenter 5 that Walker has not informed the Celtics that he has soured on them and that the four-time NBA All-Star is focused on getting as healthy as possible after dealing with a balky knee that limited him to 43 regular-season games and forced him to miss Boston’s final two playoff games."

Kemba's cousin Kedow Walker also took to social media on Wednesday to shoot down the rumors that the four-time All-Star is seeking to leave town. "Damn, who in the camp no more than me??" he said in a Tweet.

damnnnn who in the camp nomore than me?? 🤦🏾‍♂️🤣. these ppl really be bogus as hell

Rumors about the Celtics trying to trade Walker for Jrue Holiday prior to the start of the season, resurfaced again this week. Obviously that rumored deal didn't materialize, as Holiday was traded from New Orleans to the Milwaukee Bucks.
Per a report from Chris Mannix of Sports Illustrated, the Celtics nearly dealt Walker to the San Antonio Spurs for LaMarcus Aldridge - who was in the final year of his deal - at the trade deadline.

"I was told they discussed a deal involving Kemba Walker and LaMarcus Aldridge when Aldridge was still in San Antonio. Primarily because Aldridge was on the last year of his contract, whereas Kemba Walker has two years currently and about $76 million remaining on this contract, said Mannix on NBC Sports Boston Wednesday night. "So for Kemba to hear his name and understand his name was in trade rumors, that absolutely has frustrated him over the last six to eight months."

While Aldridge eventually received a buyout from the Spurs and signed as a free agent with the Brooklyn Nets before retiring due to a heart issue, that was a second trade rumor involving Walker in a span of five months.
Whether the Celtics decide to trade Walker or not, it won't be an easy deal to pull off after the last two seasons plagued with knee issues. At 31, he's set to make $36 million in 2021-22, with a player option for 2022-23 worth $37.6 million that will make it difficult to move without other assets such as young talent and or draft picks.
Walker averaged 19.3 points, 4.9 assists, 4.0 rebounds and 1.1 steals per-game this past season. He shot 42% from the field and 36% from 3-point range while playing just under 32 minutes per contest.