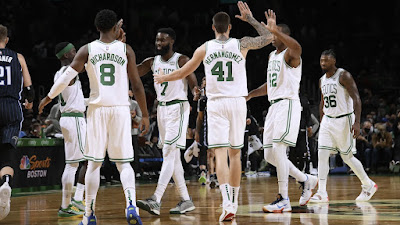 It's no secret that the two teams that NBA analysts have at the top of the Eastern Conference are the Milwaukee Bucks and the Brooklyn Nets.
The reigning champions have two-time league and 2021 Finals MVP Giannis Antetokounmpo, while former most valuable players Kevin Durant and James Harden play for the other New York team. Still, despite Kyrie Irving's vaccination status being up in the air, the Nets and Bucks more than likely will own the top-two seeds in the East.
After that, it's anyone's guess, especially with the Ben Simmons' situation in Philly unresolved, teams like the 76ers, Miami Heat and Atlanta Hawks could take up the next three spots. Then, there's the Celtics, who could surprise many after a 36-36 finish as the seventh seed a season ago.
According to ESPN's Zach Lowe, Boston's changes to its roster, coaching staff and front office this summer will have positive results in the upcoming 2021-22 campaign. Lowe also believes that it will come down to defense -- an area of which there'll be significant improvements to become one of the league's best this year.

"People are sleeping on Boston," Lowe wrote. "The Celtics are so deep, with makings of a top-5-ish defense; lineups featuring Marcus Smart, Jayson Tatum, Jaylen Brown, and Robert Williams III will be hard to score against. Don't fixate on Al Horford potentially starting games in what appears to be an antiquated double-big arrangement. It might actually work given the collective passing between Horford and Williams -- and the ability of Brown and Tatum to knife through tight corridors."

While the two big-man lineup of Daniel Theis and Tristan Thompson didn't always seem to function for then coach Brad Stevens a season ago, this time around having the option of Robert Williams and mentor Al Horford in the Celtics' starting five could prove to be much more successful.
In Boston's 98-97 win over the Magic in their preseason opener Monday night, Horford seemingly fit right into the offense and defensive schemes like he never left. Though 'Big Al' and Robert Williams both didn't start the game together, the thought of hard-nosed pick-and-roll coverage on one end and setting hard screens to create open shots on the other -- should prove to be much more effective and fun to watch than last year's double-big tandem.

"Regardless, Boston will play Brown at power forward a ton, and it has the depth to build those lineups between Payton Pritchard, Josh Richardson, Dennis Schroder, and Aaron Nesmith (I like Nesmith's last 20 games, and Richardson is better than he looked amid dysfunctional spacing in Philly and bouts with COVID-19 in Dallas. Smart can play beside Schroder or Pritchard)," Lowe added. "If either Grant Williams or Juancho Hernangomez proves a reliable bridge between those two lineups types, Boston is in business."

The East is as deep as its been in quite some time and the 2021-22 Celtics' roster is just an example of how depth can dictate having homecourt advantage or not come playoff time.
Joel Pavón
Follow @Joe1_CSP