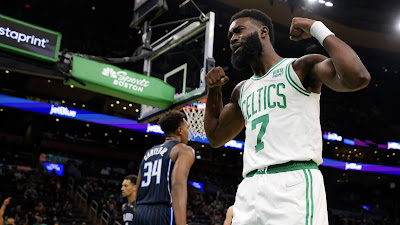 Jaylen Brown has tested positive for COVID-19, the Celtics announced Friday. The All-Star is asymptomatic and quarantining, the team added.
Brown will be held out of Saturday's preseason game against the Toronto Raptors at TD Garden due to being put into the league's Health and Safety Protocol.


While it's unknown if Brown is vaccinated or not and currently isn't showing any symptoms, he could possibly miss the Celtics regular season opener when they face the New York Knicks at Madison Square Garden on October 20.

"I have my own thoughts about it but I respect my teammates' decisions and things like that," Brown said during Media Day last month of the vaccine. "I know everybody has their own opinion about it but I think it's a personal choice."

Brown also mentioned how he thought the NBA and the players union have done a "great job" in getting the league to over the 90% vaccinated mark.
No other team was hit harder by the coronavirus last season than the Celtics, as players missed over 160 days due to COVID-19. Prior to training camp, new C's head coach Ime Udoka had a breakthrough case of COVID and participated in the team's Media Day via Zoom.
Brown's training camp is likely over after coming off a game-high 25 points in the Celtics' 98-97 win over the Magic Monday at home. Boston will head to Orlando Oct. 13 following their matchup with the Raptors, before they head to Miami Oct. 15 to wrap up their preseason.
Joel Pavón
Follow @Joe1_CSP