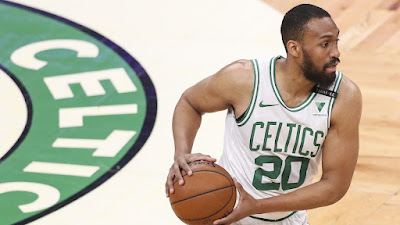 The Celtics have re-signed forward Jabari Parker just 48 hours after cutting him, according to Shams Charania of The Athletic.
The seven-year veteran was waived by the C's on Sunday and cleared waivers on Tuesday, making it possible to re-sign in Boston.


Parker signed a two-year deal in mid-April last season and his salary for the 2021-22 campaign would have been at $2,283,034. The contract became a $100,000 guarantee during he offseason and it was set to become 50% guaranteed had Parker not been waived before opening night.
By the Celtics waiving Parker, they still owe the $100,000 but Parker's new deal means only $1,1669,178 goes towards the 2021-22 cap -- saving Boston $513,856 in luxury tax.
Parker's new contract likely means that it's not guarantee until the league-wide guarantee date, which is January 10, 2022.
In 10 regular season games with the Celtics, Parker averaged 6.4 points and 3.6 rebounds, while shooting 54.2% from the field, before his scoring average bumped up to 8.5 points and 61.2% shooting from the floor in the team's first round of the playoffs loss to the Brooklyn Nets.
The Celtics roster is now at the regular season max of 15 players on standard NBA contracts and two players on Two-Way deal.
Joel Pavón
Follow @Joe1_CSP