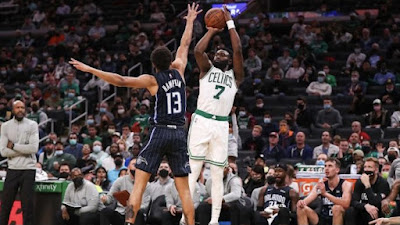 Jaylen Brown made his return to the court Monday night in the Celtics' 98-97 preseason win over the Orlando Magic at TD Garden.
Brown missed the last week of the 2020-21 season and the entire first round playoff series against the Brooklyn Nets due to a wrist injury that required surgery. The All-Star guard didn't show any signs of rust as he finished with a game-high 25 points on 8-of-16 shooting in 26 minutes of action of the preseason home opener.
Scoring 14 of the Celtics' first 17 points in the first quarter, Brown was aggressive, while attacking the basket, hitting mid-range jumpers and 3-pointers. He looked as explosive and athletic as he's ever been, especially in transition and driving to the rim, which are very encouraging signs of already looking like he's in game shape.

"I feel great, and I'm ready to play some good basketball," said Brown in his postgame presser.

Brown, who added four rebounds and three assists to his stat-line in his first real basketball game since May, also noted that his wrist is about 80-85 percent healthy despite taking a hit that later hurt him once the adrenaline wore off from a rocking atmosphere crowd at the Garden.

"As the season goes on, it's going to get better," Brown said. "So today was a good test."

Still, as good as it felt to finally get back on the court, Brown knows not to take it for granted after having to go under the knife for the first time because of an injury. Though he had second thoughts about having surgery, he didn't enjoy watching the playoffs from the sidelines, which has helped him gain some new perspective.

"When you're forced to look at it from different angles, the game just looks different in a sense," Brown explained. "I don't know how to describe it. It doesn't look the same. The game definitely feels different but in a good way."

Brown and the Celtics will look to ride some momentum into Saturday when they host the Toronto Raptors for their second of four preseason matchups.
Joel Pavón
Follow @Joe1_CSP