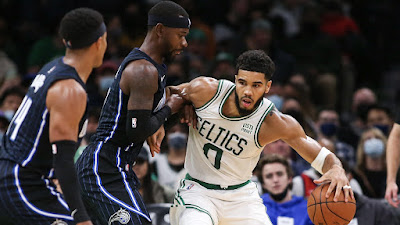 Jayson Tatum worked on his game, body and mind this summer, as the Celtics All-Star went to work in the preseason opener against the Orlando Magic Monday night.
The 23-year old forward found his way to the rim with ease and used plenty of physicality in the C's 98-97 win at TD Garden. While Jaylen Brown led all scorers with 25 points, it was Tatum who was not far behind, finishing with 18 points and 9 rebounds in 25 minutes of limited action.
Though he struggled from 3, going 1-of-4 on the night and hit 5-of-12 on the rest of his field goal attempts, Tatum was aggressive in getting to the rim -- going 5-of-5 from the free throw line.

"We like him (Tatum) in a lot of spots," said Celtics coach Ime Udoka in his postgame presser. "We worked on a few things, and we're starting to implement more sets to get him into those spots. They were crowding him on the perimeter, trying to take him off his spots, so we got him some easy looks out of timeouts."

Tatum found ways of getting to the hoop rather than just settling for perimeter and mid-range jumpers, which is very encouraging and a sign of a new start that begins with coach Udoka and his staff.

"We talked about playing big boy ball down there, and he got to the basket quite a few times, nice dunks and things of that nature," said Udoka of Tatum's play in the paint. "But we want him to be able to score from everywhere."

If you haven't noticed Tatum's bulked up physique yet, take a look below on one of his dunks over one of the Magic's bigs and try to convince yourself that the All-Star forward hasn't grasped the "big boy ball" concept yet that his coach has coined a phrase for already.

JAYSON TATUM WITH THE POSTER! 😤😤😤 pic.twitter.com/IUHcCWfAsj

Tatum and the Celtics will host the Toronto Raptors on Saturday in their second preseason matchup at home.
Joel Pavón
Follow @Joe1_CSP