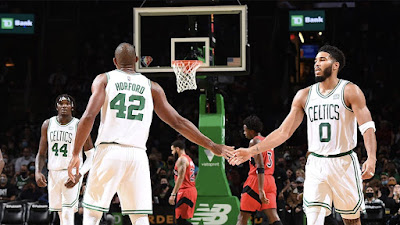 The Celtics displayed their added depth Saturday night, as they beat the Toronto Raptors 113-111 at TD Garden for their second straight preseason victory.
Playing without Jaylen Brown (Health and Safety Protocol) and Dennis Schröder (knee contusion), Celtics coach Ime Udoka elected to go with a double-big starting five which saw Al Horford alongside Robert Williams III for the first time in exhibition play.
It was another down to the wire thriller, as 'Big Al' scored 16 points on 6-of-9 shooting and a perfect 4-of-4 from behind the arc, to go with two blocks and a steal in 24 minutes of action.

"For me as a competitor, I want to be in the position that I'm playing when it matters most, that I do like to start," said Horford in his postgame presser. "That's just the reality of me as a competitor and me trying to feel like I can contribute and be a great asset."

Jayson Tatum led Boston with 20 points, while nearly recording a triple-double by grabbing nine rebounds and dishing out seven assists. Romeo Langford, who was the hero in the Celtics' 98-97 win over the Magic last Monday, started in place of Brown -- adding 13 points (3-of-4 from 3) in 19 minutes.

"My confidence is really high right now," said Langford postgame about his recent good shooting. "I've been putting in so much work in since day one."

Grant Williams chipped in 12 points and Payton Pritchard contributed with 11 points, 5 assists off the bench for the 2-0 preseason Celtics.
Fred VanVleet had a game-high 22 points to go with five assists and OG Anunoby scored 17 points as the Raptors' top two leaders in scoring. Gary Trent Jr. and Svi Mykhailiuk each finished with 14 and 12 points respectively for Toronto (1-2).
Celtics led 109-101 with 1:30 left in the fourth quarter before the Raptors scored eight unanswered points to knot it up with 44.6 seconds remaining following a David Johnson 3-pointer.
Jabari Parker was fouled and hit a pair of free throws on the next possession to give Boston a two-point advantage, as Johnson once again tied it for Toronto with a pullup jumper -- leaving 19.9 seconds on the clock and a chance for Udoka to draw up a final shot.
However, the same Johnson who hit back-to-back shots to give the Raptors a chance, fouled Juancho Hernangomez on the inbound pass with Boston in the bonus.
The Celtics forward sank both free throws to give the Celtics a 113-111 lead with 7.4 seconds left to play, setting up a few opportunities for the Raptors to either win the game or send it to overtime. Dalano Banton missed a 28-foot 3-pointer, which was followed up by a Issac Bonga missed put-back, before Banton grabbed the offensive board and got a shot off only to have it not count after it was reviewed and ruled that the basket was made after the buzzer sounded.
Boston shot 46.9% from the field, a huge improvement after going just 35.6% against the Magic five days prior. The Celtics also hit 16-of-46 (47.5%) from 3, something that can easily be accredited to the team moving the ball -- which resulted in 29 total assists on the night.

"We were doing a great job moving the ball, got a lot of open looks," said Udoka on the Celtics' ball movement "That's what we've been emphasizing since Day 1."

Celtics will head to Orlando in a re-match with the Magic Wednesday and then Miami on Friday to wrap-up their preseason.
Joel Pavón
Follow @Joe1_CSP