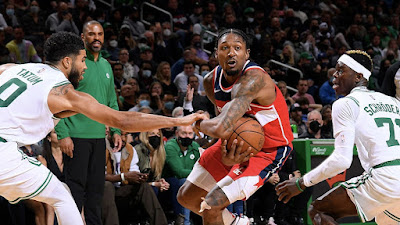 It almost seems like night and day when the Celtics have played at home versus on the road, as their comeback fell short in a 116-107 loss to the Washington Wizards at TD Garden Wednesday night.
Jayson Tatum (23 points) and Jaylen Brown (13 points) both struggled offensively as they shot a combined 14-of-38 from the field and 2-of-12 from behind the arc. The C's overall hit only 43.5% of their attempts while the Wizards made 51.2% of theirs.

"It's on all of us," said Tatum said in his postgame presser. "We started well. But we had that little drought. We have to try to avoid playing from behind."

Dennis Schröder finished with 22 points off the bench, while Robert Williams added 13 points and 11 rebounds for the Celtics, who are now 2-3 on the young season.
Depite Al Horford making his return to the lineup, recording another double-double of 16 points and 11 rebounds, he wasn't too pleased with the outcome once again in front of their home crowd.

"I expected us to come out here and win, and be at a certain level," Horford said during his postgame comments. "We need to be better than this. There's a lot of work ahead of us."

Montrezl Harrell led the Wizards with 25 points, 11 rebounds off the bench and Spencer Dinwiddie added 22 points on 8-of-16 from the field. Bradley Beal chipped in 17 points and 10 rebounds for Washington -- who have won three of their last four.
Boston trailed 79-64 with 5:45 left in the third quarter, before using a 24-8 run to close the period and take a one-point advantage into the final frame.
Washington used a 21-10 spurt of their own to start the fourth to take a 108-98 lead with 3:23 left. The Celtics responded with seven unanswered points including a Schröder corner 3-point to cut the deficit to three at the two minute warning.
The Celtics only managed two more points the rest of the way, as the Wizards scored eight more in the final 1:23 of the game.

"Our intensity and focus wasn't there from the start," said coach Ime Udoka. "You could see it in the first quarter; honestly from shootaround, where I got on them for lack of focus."

It was less than a week ago in their home opener that Udoka said the Celtics got "punked" after a 32-point blowout loss at the hands of the Raptors.
The Celtics will have a shot at evening the score on Saturday night when they get a rematch against the Wizards once again at Capital One Arena.
Game Notes:
Boston was outrebounded 36-27 and outscored in the paint 58-56. Romeo Langford missed his third straight game with soreness in his left calf.
Joel Pavón
Follow @Joe1_CSP