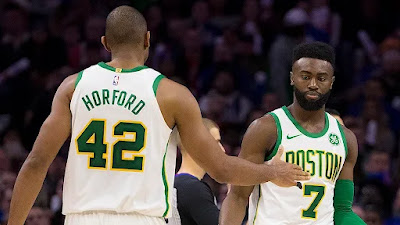 With the start of the 2021-22 season two days away, the Celtics are still without All-Star Jaylen Brown and veteran big man Al Horford due to still being in the league's Health and Safety Protocol.
Coach Ime Udoka spoke to the media this afternoon following the team's practice, giving somewhat of an update on Brown and Horford's status for opening night against the New York Knicks.

"Nothing new," said Udoka in his Monday presser. "Those guys are doing well, but we're just waiting to hear back on the testing results. We'll find out obviously in the next few days. They're doing well as of now and we hope to have them back."

It was reported Brown tested positive for COVID-19 on October 8th, with an announcement of Al Horford also testing positive four days later. It remains unclear if both Celtics teammates were vaccinated or not.
Still, there's a chance that between the two, Brown is likely the one to suit up Wednesday night at Madison Square Garden.

"It's a discussion we're gonna have.," said Udoka. "We like to get somebody reps instead of throwing them into a game, being out all that time. Something we traditionally do not do."

ESPN will have the matchup between the Celtics and Knicks beginning at 7:30 PM ET.
Joel Pavón
Follow @Joe1_CSP