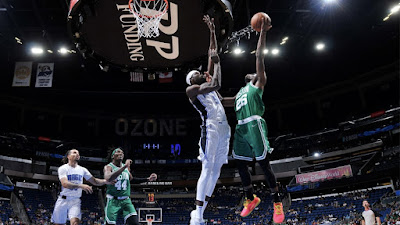 The shorthanded Celtics lost to the Orlando Magic 103-102 at the Amway Center Wednesday in their third game of the preseason.
With Al Horford and Jaylen Brown already in Health and Safety Protocol, coach Ime Udoka also gave the night off to Marcus Smart, Jayson Tatum, Dennis Schröder, and Josh Richardson.
Aaron Nesmith finished with a game-high 23 points on 8-of-16 from the field, including going 4-of-8 from behind the arc in his first start in three games. He also dished out four assists and grabbed three rebounds in 27 minutes of action.

"I was just reading the defense, being myself and relying on the things I worked on this summer," Nesmith said during his postgame presser. "It was a different role I had to play tonight because of who was out, so just stepping up and playing that role to the best of my ability."

Romeo Lanford also started and added 12 points, while Payton Pritchard chipped in 10 points, four rebounds, before leaving the game with 1:25 left in the second quarter when he sustained a nose injury.
According to Udoka, Pritchard's nose was most likely broken after the second year guard ran into Magic forward Ignas Brazdeikis' hand and did not return.
R.J. Hampton led Orlando with 20 points and eight rebounds off the bench, while Wendell Carter Jr. scored 13 points and grabbed 9 rebounds. Mo Bamba chipped in 10 points for the Magic, who won their first exhibition game in four tries.
In another nail bitter in the fourth quarter between these two clubs, no team led by more than one point in the final 3:50 of the game.
Rookie Jeff Dowtin (10 points) hit the game-winner on a mid-range jumper to give the Magic a 103-102 lead leaving 0.2 seconds left on the clock.
The Celtics, who beat this Magic's team 10 days ago, were unable to get a shot off as Orlando escaped with their lone win of the preseason at home.
Boston hit 42.9% of their shots from the field and 33.3% from 3-point territory, while grabbing 45 rebounds and dishing out 23 assists.
The Magic had six players registering double-digits in scoring while the team shot 46.4% overall from the floor. They also recorded 47 rebounds and 18 assists on the night.
Udoka afterwards praised Nesmith and others despite the loss, saying they stepped up in the absence of six players.

"Very good complementary player...I'm proud of him. Proud of the work he's put in," said Udoka of Nesmith. "Him, Romeo (Langford), Payton (Pritchard) before he got hurt, did a good job of taking advantage of their opportunities tonight and this preseason."

The Celtics head to Miami on Friday to face the Heat in their preseason finale, ESPN2 will have the tip-off beginning at 6:30 PM EST.
Joel Pavón
Follow @Joe1_CSP