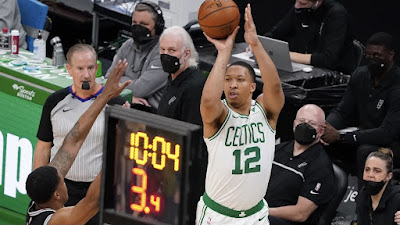 With Jaylen Brown out due to COVID-19 Health and Safety Protocol, the Celtics elected to go with the double-big starting five of Al Horford and Robert Williams in Saturday's 113-111 win over the Raptors.
Third year center Grant Williams took full advantage of some leftover playing time that were tossed his way, scoring 12 points on 4-of-8 shooting, including 2-of-4 from 3-point territory to go along with three rebounds and a block in 16 minutes of action to lead the bench. Plus, he also threw down a dunk on a feed from Horford that was highlight reel worthy.

Grant Williams will need to put in more performances like he did against Toronto to separate himself from the crowded pack that is the Celtics' frontcourt depth chart this season, as veterans like Enes Kanter and Juancho Hernangomez were added to the roster in the summer -- not to mention Bruno Fernando and Jabari Parker are also battling for minutes.
Still, Grant Williams looks to improve, especially since he's been learning from his new teammate Al Horford, who says the 22-year old is "like a sponge and "picking things up."

"When you're around a guy like Al, he just does a lot of things you see on film that people wouldn't normally do," Williams said of Horford. "So just watching him and his approach every single day and how he moves in practice."

In his first two seasons as a pro, Williams averaged 4.7 points on 42.6% shooting, 32.0% from beyond the arc and 2.8 rebounds in 16.5 minutes. So how does experience play a role in his development for the upcoming season, as new coach Ime Udoka's offensive means to run and move the ball?

"They always say that the game really slows down as time goes on," he said. "So, I saw it through my second year and, now, seeing it more through my third, just spacing-wise - seeing where to be on the court, when to cut, when to space and just understanding teammates a little bit better."

The Celtics face the Orlando Magic on the road Wednesday, before heading to Miami to take on the Heat in their preseason finale Friday night.
Joel Pavón
Follow @Joe1_CSP